Now in its 47th day, the Russia-Ukraine war continues to captivate the attention of the world, as dramatic and horrific scenes of human atrocities flash daily on the screen at the hands of Russian President Vladimir Putin. 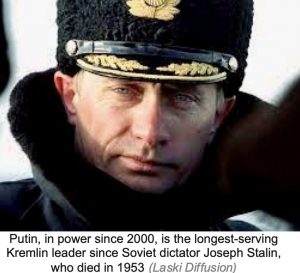 Who is Vladimir Putin?
Vladimir Putin, 69, has served as President of Russia since 2012, and previously from 2000 until 2008. As he was then constitutionally limited to two consecutive terms as president, he served as the Prime Minister from 1999 to 2000, and again from 2008 to 2012 -- both times maintaining full control under his hand-picked successor, Dmitry Medvedev.

Born in 1952 in Leningrad, Russia (now Saint Petersburg), the youngest of three children born to Vladimir Spiridonovich Putin, a conscript in the Soviet Navy, and Maria Ivanovna Putina, a factory worker.

After graduating from Leningrad State University in 1975, he began a 15-year career as a KGB (Committee for State Security) foreign intelligence officer, rising to the rank of Lieutenant Colonel. He resigned just prior to the dissolution of the USSR in 1991 to begin his political career.

In 1994, at age 42, Putin rose to the post of First Deputy Mayor of Saint Petersburg and headed the Committee for Foreign Economic Relations (CFER) where he oversaw licensing and contracts for companies to conduct foreign trade. Subsequent criminal corruption investigations found Putin had benefited from huge commissions on contracts and was implicated in money laundering operations and schemes, but was never charged. 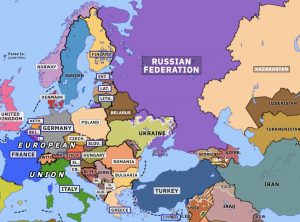 In 1996, he joined the administration of President Boris Yeltsin in Moscow, serving as Director of the Federal Security Service (FSB) and Secretary of the Security Council, before being appointed as Prime Minister in August 1999.

After the resignation of Yeltsin in December 1999, Putin became Acting President and, in March 2000, was elected outright to his first term as President as an independent with 53% after months of state-controlled media promotion of his candidacy.

Putin amassed most of his wealth after he very publicly arrested Russia's then-richest citizen and new Putin critic Mikhail Khodorkovsky, in 2003 for fraud and tax evasion. Other Oligarchs were reportedly told by Putin that if they wanted to avoid the same fate, they were to turn over "50%" of their revenue to him personally. 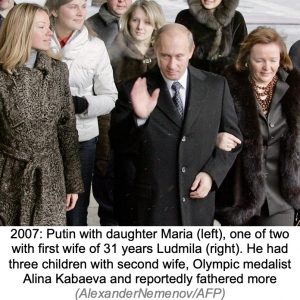 Putin's Russia
Putin's first term marked a period of economic growth for Russia following economic reforms and a fivefold increase in the price of oil and gas.

He was reelected President as an independent in 2004, with 71% of the vote against the Communist Party candidate in an election again manipulated by state-controlled media.

As Prime Minister under Medvedev from 2008 to 2012, he oversaw military and police reform, as well as Russia's August 2008 victory in its war against Georgia.

Putin returned to the presidency for a third time in 2012, now for six years, as the presidential term had been extended by the Duma under Medvedev's direction. Putin won under the United Russia party, officially securing 63.6% of the vote in an election marred by widespread voter fraud, followed by weeks of public protests. 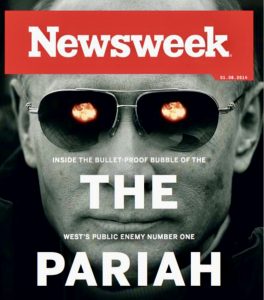 Putin’s first year back as president was characterized by a largely successful effort to stifle the protest movement. Opposition leaders were jailed, and nongovernmental organizations that received funding from abroad were labeled as “foreign agents.”

In the wake of Ukraine's February 2014 bloody anti-government Maidan Revolution and the ouster of pro-Russian Ukrainian President Viktor Yanukovych, Russia descended on Ukraine's Crimean Peninsula, with Putin proclaiming the annexation of Crimea in March of 2014.

Russian-backed separatists, long ensconced in violent conflict in the Donetsk and Luhansk territories of Donbas, declared the region independent of Ukraine.

In a September 2015 address before the UN General Assembly, Putin presented his vision of Russia as a world power, capable of projecting its influence abroad, while painting the US and NATO as threats to global security. Two days later he ordered a military intervention in the Syria Civil war. 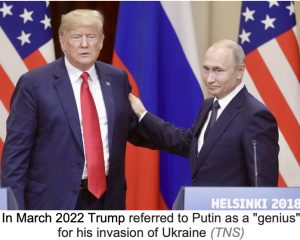 Putin was reelected to a fourth term in March 2018 with 76% of the vote, amid allegations of voter fraud and ballot tampering.

The results were embraced by United State President Donald Trump (R), who hailed Putin as "very smart" and "a leader", helping elevate Putin's stature on the world stage.

In March 2020 the Duma, Russia’s parliament, voted to approve sweeping constitutional changes proposed by Putin, including an amendment that would allow him to run for reelection twice more, potentially extending his presidency to 2036. 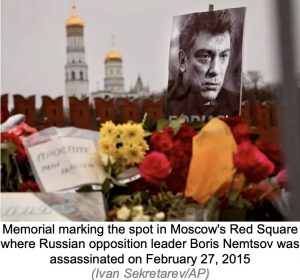 Suppressing The Opposition
Throughout his career, Putin has been implicated in the deaths of dozens of opponents, elected officials, journalists and activists who have spoken out against his authoritarian regime.

Among the highest-profile assassinations: In 2002, Russian member of parliament (MP) Vladimir Golovlev, who led the rival Liberal Russia faction, was shot dead in Moscow. Liberal MP Sergei Yushenkov was gunned down in 2003, just hours after registering his political party to participate in the December parliamentary elections. The same year, Russian journalist Yuri Shchekochinikhin fell mysteriously ill and died shortly before he was to depart to the US to meet with FBI investigators.

The 2006 assassination of Russian journalist Anna Politkovskaya, who refused to stop reporting on the atrocities of the Second Chechen War, attracted international attention, as did the 2006 radioactive poisoning of former KGB officer and outspoken Putin critic Alexander Litvinenko. 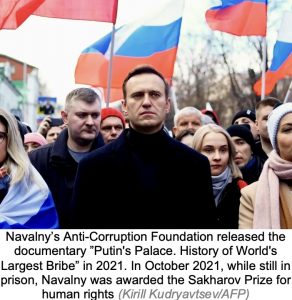 Former Deputy Prime Minister Boris Nemtsov, who had accused Putin and his party of election-rigging and embezzlement, was assassinated in 2015, and former Russian MP Denis Voronenkov was shot outside a Keiv hotel in 2017. In 2018, Russian businessman and Putin opponent Nikolai Glushkov, living in political exile, was strangled in his London home.

Putin's most formidable opponent, Russian opposition leader, lawyer, and anti-corruption activist Alexei Navalny, has been jailed numerous times over the last decade by the Russian government. Navalny was barred from running in the 2018 presidential election, and in August 2020, was hospitalized in a coma after being poisoned.

After recuperating in exile in Germany, Navalny, who had continued to use his social media following of over six million YouTube subscribers to condemn Putin and his attackers, defiantly returned to Russia in January 2021. He was instantly arrested and imprisoned, and in March 2022, an additional nine years in prison, allegedly for embezzlement and contempt of court, was added to his two-and-a-half-year sentence. 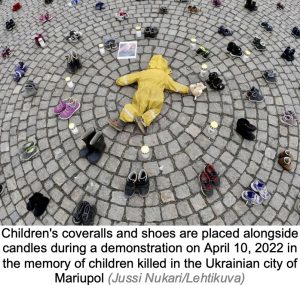 Russia has poured more than 190,000 troops across the border, while Ukraine’s active-duty military is estimated at 246,000.

Russia last announced troop casualties March 25, reporting 1,351 deaths and 3,825 wounded, while NATO estimates that 30,000 to 40,000 Russian troops have been killed, wounded or taken prisoner in Ukraine.

Today, Prosecutor General of Ukraine Iryna Venediktova, who has described Vladimir Putin as the "main war criminal of the 21st century" said the government has identified at least 5,800 alleged war crimes.