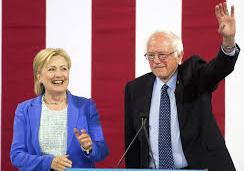 Before a crowd of thousands, Sanders endorsed Clinton as the Party's nominee, saying "I intend to do everything I can to make certain she will be the next president of the United States."

In the 30-minute speech, Sanders took the final opportunity to underscore the power of his primary campaign and army of supporters, as well as the issues that helped drive his candidacy.

Clinton officially became the "presumptive" Democratic nominee when she clinched the requisite 2,383 delegate votes 36 days ago, but Sanders delayed endorsing her until after he negotiated inclusion of key issues in the party's formal platform.

"Let me begin by thanking the 13 million Americans who voted for me during the Democratic primaries," Sanders said. "Our campaign won the primaries and caucuses in 22 states, and when the roll call at the Democratic National Convention is announced, it will show that we won almost 1,900 delegates."
-- Democratic Presidential Candidate Bernie Sanders

Sanders on the Issues in his endorsement speech:

The endorsement is the outcome of intense negotiations between Clinton Campaign Manager Robby Mook, and Sanders top Advisor Jeff Weaver.

Clinton praised Sanders for bringing people "off the sidelines and into the political process...He has energized and inspired a generation of young people who care deeply about our country."

She closed by assuring all Sanders supporters that "When I am in the White House, you will have a seat at the table"

13 days to the Democratic Convention! Check the DemList Convention Calendar for all events at the Convention and watch for our Daily updates. Pass it on!

March 14, 2022 An energized Democratic National Committee (DNC) met in Washington, DC last week for its first in-person meeting in two years in what felt like a homecoming and, at times...