Former Secretary of State Madeleine Albright died this week, bringing an end to the life of a brilliant diplomat and trailblazer who was revered internationally and universally respected by ordinary Americans for her devotion to serving the interests of the United States.

The United States' first female Secretary of State, President Joe Biden called her "a force," whose "hands turned the tide of history." 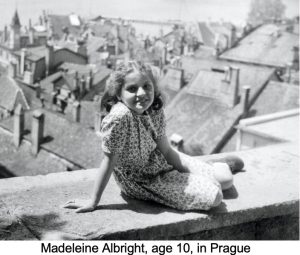 Early years
Madeleine Jana Korbel Albright was born on May 15, 1937, in Prague, Czechoslovakia, to Josef Korbel, a Czech diplomat, and Anna Korbel (nee Spieglova), a homemaker.

Following the German occupation of Czechoslovakia in 1938, her family escaped with the exiled government of Czechoslovakian President Edvard Benes, for whom her father worked until the end of World War II when they returned to Prague. When Czech Communists overthrew the government in 1948, Albright’s father, then working at the Czechoslovakian Embassy in Yugoslavia, applied for political asylum in the US and they settled in Colorado.

It was not until 1997 that Albright and her two siblings would learn that their parents converted from Judaism to Catholicism in 1941 to avoid persecution, and that dozens of their relatives in Czechoslovakia, including three of their grandparents, were murdered in the Holocaust. 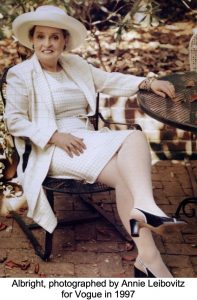 After graduating from Wellesley College in 1959, Albright studied international relations and Russian at the Paul H. Nitze School of Advanced International Studies at John Hopkins University. She went on to earn Masters and Doctorate degrees from Columbia University, as well as a Certificate from its Russian Institute.

In 1959, Albright married journalist Joseph Albright, with whom she had three children, Alice, Anne and Katharine, before divorcing in 1982.

After Carter’s loss in 1980, she worked as a scholar at the Woodrow Wilson International Center, then as an Eastern European studies professor at Georgetown University where she also directed the university’s program on Women in Global Politics. She served as the foreign policy advisor for vice presidential candidate Geraldine Ferraro in 1984 and for presidential candidate Michael Dukakis in 1988. 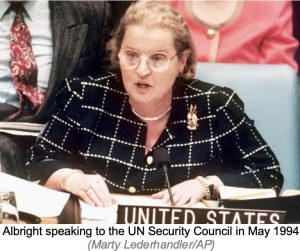 US Ambassador to the United Nations
In 1993, she became US Ambassador to the UN under President Bill Clinton, where she established a reputation as a tough advocate for the global interests of the United States. Albright clashed repeatedly with UN Secretary-General Boutros Boutros-Ghali over peacekeeping operations in Somalia, Rwanda and the Bosnian War.

Although Clinton had endorsed humanitarian aid to victims of the civil war in Somalia in 1992, the US retreated from politically risky UN missions after 18 American troops were publicly slain by Somali warlords in Mogadishu in 1993.

In her 2003 memoir, Madam Secretary, Albright wrote, “My deepest regret from my years in public service is the failure of the United States and the international community to act sooner to halt these crimes.”

In 1996, when Cuban military pilots shot down two small civilian aircraft flown by a Cuban American exile group over international waters, Albright famously said, “This is not cojones. This is cowardice,” which Clinton called “the most effective one-liner in the whole administration’s foreign policy.” 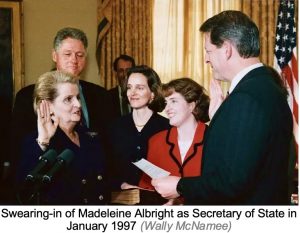 Secretary of State
Clinton's 1997 nomination of Albright to be his Secretary of State was unanimously confirmed by the United States Senate 99-0, making her the highest-ranking woman in the history of the US government.

She then embarked on a nine-nation world tour, with stops in Rome, Paris, London, Brussels, Bonn, Moscow, Tokyo, Seoul and Beijing as Clinton's chief foreign policymaker and spokeswoman. Of the successful diplomatic mission she said, “Everybody has their own style, and mine is people to people.”

In an early crisis, Albright successfully navigated negotiations with Iraq when President Saddam Hussein illegally blocked the access of UN inspectors from chemical and biological weapons sites in 1998. 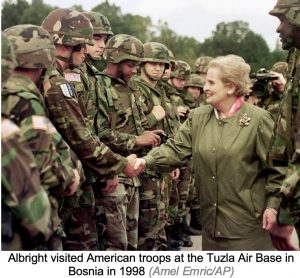 After months of warnings and an American military buildup in the region, Albright and Clinton threatened to launch aerial attacks on Iraq unless the sites were reopened to inspection. “Iraq has a simple choice. Reverse course or face the consequences,” Albright said in a public warning to Hussein, who relented.

During her four-year tenure, Albright influenced foreign policy in Bosnia and Herzegovina and the Middle East and promoted the eastward expansion of NATO and the prevention of nuclear weapons increasing.

Albright represented the US during the transfer of sovereignty over Hong Kong, pushed for military intervention in the targeting of ethnic Albanians in Kosovo, and in 2000, was one of the highest-level Western diplomats to meet North Korean leader Kim Jong-Il. 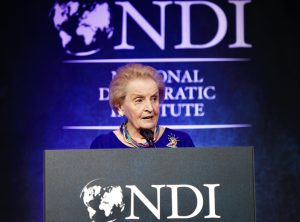 She was elected a fellow of the American Academy of Arts and Sciences, served on the board of directors for the Council on Foreign Relations, on the International Advisory Committee of the Brookings Doha Center, and as the Mortara Distinguished Professor of Diplomacy at the Georgetown University School of Foreign Service.

From 2001 until her passing, she served as the Chair of the National Democratic Institute for International Affairs. She also served as President of the Truman Scholarship Foundation, and previously as Co-Chair of the Commission on Legal Empowerment of the Poor, and as Chair of the Council of Women World Leaders “Women’s Ministerial Initiative.” 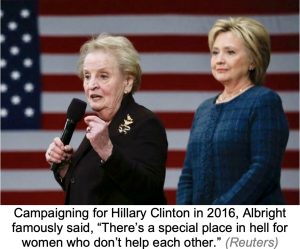 Albright was a seven-time New York Times bestselling author. Her most recent book, Hell and Other Destinations was published in April 2020. Her other books include her autobiography, Madam Secretary: A Memoir (2003); The Mighty and the Almighty: Reflections on America, God, and World Affairs (2006); Memo to the President: How We Can Restore America’s Reputation and Leadership (2008); Read My Pins: Stories from a Diplomat’s Jewel Box (2009); Prague Winter: A Personal Story of Remembrance and War, 1937-1948 (2012), and Fascism: A Warning (2018).