Tracking the revolving door of current Trump Admnistration Cabinet members, senior White House Staff and Advisors (add Attorneys) is challenging, but the most recent string of shakeups at the White House begs for an update on the numbers.

Among the most unsettling was the firing of FBI Deputy Director Andrew McCabe less than 24 hours before his official retirement date.  McCabe is cooperating with the Special Counsel's investigation.

Gone from the White House does not, however, mean gone from the public eye.  Many of the departed are expected to make appearances again before the Russia-Trump investigation is over.

While the turnover may ensure the President of loyalty within his ranks, the very public and often controversial nature of the departures continue to draw attention to a White House in purported chaos, and the instability of those at the helm.

To follow is just a sampling of the Key Departures: 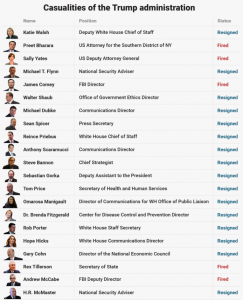 April 24, 2017 This week kicks off the countdown to Donald Trump’s 100th day in office, and the anticipated daily analysis between now and April 29th, of campaign promises kept or broken...