The presidential primary season may be essentially over, but the delegate season is still in full force.

With the delays in the traditional state delegate selection process due to the coronavirus pandemic, the states are just now wrapping up the final stages of selecting their full suite of convention delegates.

Delegate Categories
There are two types of convention delegates: Automatic and Pledged 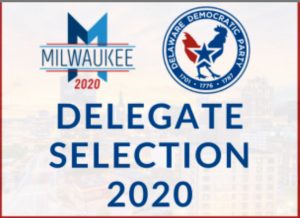 Automatic, or unpledged delegates are elected or allocated based on public or party office, and represent longer-term institutional members members of the Party. They include:

DNC Members (445): Elected at the local level as Committeepersons for four-year terms, they represent their local and state Democratic party members and vote in national party business, policy and the platform. Membership is equally divided between men and women.

Other automatic delegates include Democratic Members of the US Senate and House (280), Democratic Governors (24), and Distinguished Party Leaders (22) like former Presidents, Vice Presidents and Party Chairs.

The eight unpledged delegates from Democrats Abroad carry half-votes at the convention, yielding a forecast total of 771 votes, but 775 delegates.

The automatic delegates, informally known as "superdelegates," participate in, and vote on, official party business at the convention. 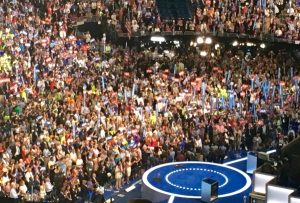 Delegates at the 2016 Convention (Kimberly Scott/DemList)

They do not, however, have a vote on the first ballot in the nominating process unless the presumptive nominee accumulates more than 50% of the pledged delegates prior to the convening of the convention - as is the case with Joe Biden.

Pledged Delegates are those secured through the primary process and who vote on the first ballot for the nominee. They fall into three categories:

* Statewide/At Large (898): Nominated and elected at the state level, they are allocated based on the statewide percentage presidential candidates receive in the primary or caucus. 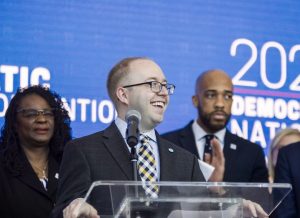 Allocation of Delegates
Each state is allocated a total number of pledged delegates proportionate to the state's share of the electoral college, and to the state's past Democratic votes for president.

From the designated state number, pledged delegates are allocated proportionally to presidential candidates based on the percentage of the vote they win in a state primary or caucus.

To secure delegates, candidates must have 1) reached the 15% threshold at the statewide level, or 2) 15% of the vote at the congressional district level.

The primaries occur in fifty states, five territories, D.C. and Democrats Abroad, normally between February 3rd and June 9th. COVID, however, delayed the presidential primaries of two dozen states, with all but one (Connecticut on August 11th) just wrapping up this month.

Hence, the process of selecting the named delegates to the national convention, often done in post-primary state conventions, is still underway in some states -- with just 26 days until the Democratic Convention.

September 9, 2020 Tuesday’s New Hampshire and Rhode Island state primary elections were among the last on the election calendar, and in two states with very different political environments...