This is the seventh legal team to represent Donald Trump, with the last having quit as a group just over a week before the beginning of the trial.

The current team of three is experienced in criminal defense proceedings but, unusually, none the counsel lawyers is known as a constitutional scholar.

As previewed in the first day of the trial Tuesday, their arguments centered on the constitutionality of the Article of Impeachment before the Senate.

Michael van der Veen is a Philadelphia-based attorney specializing in personal injury and criminal defense who touts "multimillion-dollar jury verdicts in State and Federal Courts." van der Veen, who has a law degree from Quinnipiac School of Law, and an LLM in Trial Advocacy from Temple University, represented a client in a suit against then-President Trump for baseless mail-in voting fraud claims in 2020. 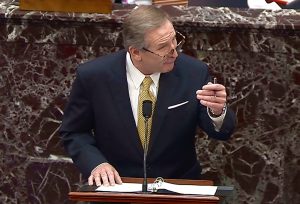 Van der Veen attempted to cast the proceedings as "completely divorced from the facts, the evidence, and the interests of the American people."

Calling the proceedings "constitutional cancel culture," he said "history will record this shameful effort as a deliberate attempt by the Democratic Party to smear, censor and cancel, not just President Trump, but the 75 million Americans who voted for him."

Van der Veen argued that Trump's quote - "If you don't fight like hell, you're not going to have a country anymore" - was "ordinary political rhetoric" that has been used by politicians for "hundreds of years." 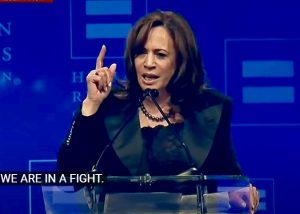 Video montage including VP Harris, whose name, along with other lawmaker's, was mispronounced by the defense in trial

As "evidence," the defense team played several lengthy video montages - set to ominous music - to make their point throughout the afternoon, including one of dozens of Democrats using the word "fight" in speeches and interviews.

Van der Veen alternatively presented tweets and pictures of Trump emphasizing the GOP as the party of "law and order" to claim that Trump wasn't responsible for provoking the Jan. 6 insurrection, but that it was, instead, " a small group who came to engage in violent and menacing behavior, highjacking it for their own purpose."

The second presentation, by defense attorney David Schoen, addressed "the rush to judgment for a snap impeachment" and "the denial of due process." 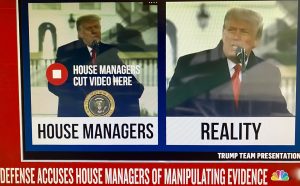 His eclectic career includes representing civil rights cases challenging police and prison violence, and represented the Ku Klux Klan in successfully challenging a law that forbade them from marching while wearing hoods. As a criminal defense lawyer he has represented organized crime figures, including those close to the Russian mob, sex offender Jeffrey Epstein and, most famously, Trump ally Roger Stone during his trial related to charges made during the Mueller investigation. 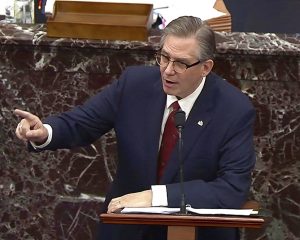 Schoen claimed "House Managers manipulated evidence and selectively edited footage" from the Capitol riot and the ex-President's words, and challenged House Managers' use of word "reportedly" in their testimony as a euphemism for 'I have no real evidence."

He also claimed, falsely, that defense attorneys had not been provided with copies of the "shocking new security footage" in advance of the House Manager's presentation this week.

Bruce Castor Jr.
Bruce Castor is a former Republican District Attorney and County Commissioner from Montgomery County, Pennsylvania, who also briefly served as the state's Solicitor General and Acting Attorney General in 2016. Castor, who received his JD from Washington and Lee University School of Law, is most famous for his decision not to pursue sexual assault charges against comedian Bill Cosby in 2005. 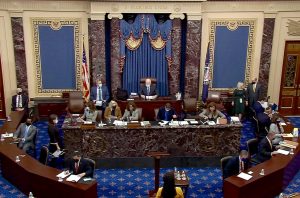 In resting the case for the defense, Castor focused on rebuffing the characterization that an "insurrection" had even taken place at the Capitol, saying "clearly there was no insurrection. Insurrection is a term of art, it's defined in the law" and "involves taking over a country, a shadow government...and having some plan on what you're going to do."

Castor claimed Democrats failed to connect the assault to Trump and repeated his assertion that the managers manipulated the evidence they presented due to "political hatred."

Trump's defense finished their arguments in 2 1/2 hours, compared to the 9 1/2 hours used by House Managers. 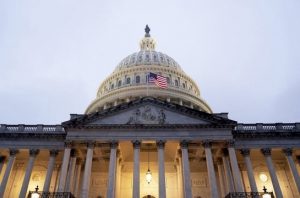 The Senate Impeachment trial is in adjournment until 10am Saturday (Yahoo)

Question & Answer Phase
At 4:15pm, the Senate began the question and answer phase of the trial, which allowed for up to four hours for Senators to submit written questions to the impeachment managers and to Trump's attorneys.

The questions alternated between the two parties, with five minutes each to respond, revisiting key points of the prosecution and defense, and wrapping it up in just over two hours.

Trump's defense team had initially requested the Senate pause the proceedings from Friday at sundown through Sunday morning, in observance of the Sabbath, but withdrew that request Wednesday, meaning the trial will now continue Saturday at 10:00am.

The last phase tomorrow entails closing arguments, with two hours for each side, followed by a vote on conviction or acquittal. A two-thirds supermajority is required to convict.
DemList will keep you informed.

March 24, 2022 The fourth and final day of hearings for US Supreme Court nominee Judge Ketanji Brown Jackson was held today, with the testimony of witnesses and experts for and against...