The Democratic National Committee (DNC) has announced that Houston, Texas will be the location for the third Democratic presidential debate, to be held on September 12th and 13th.

Florida, with 29 electoral votes and where Trump won 49.1% to Hillary Clinton with 47.8% in 2016, was the site of the June 26th & 27th debates. Night two of the first debate in Miami broke records for the most-watched Democratic primary debate in history, with 18.1 million people tuning in by television, and another 9 million via livestream online. 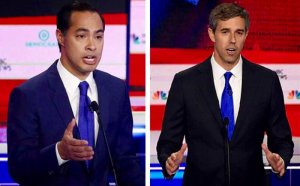 The second debate will take place at the end of this month in Detroit, Michigan, which holds 16 electoral votes. Although Trump narrowly beat Clinton, 47.6% to 47.3%, in the traditionally blue state, Democrats hold both US Senate seats and captured the Governor's mansion in 2018.

In Texas, which has voted for a Republican for the last four decades, former Congressman and current presidential candidate Beto O'Rourke came within 3% points of beating incumbent Republican Senator Ted Cruz in 2018. The Latino vote, often referred to as "the Sleeping Giant," reached about 1.87 million in the Lone Star State last November, nearly doubled that of 2014.

The Download on the Debates
The debate requirements, for the first time, add a grassroots fundraising metric to the mix, in addition to the traditional polling threshold. The qualifications become stricter in the Fall, which is expected to be an important turning point for narrowing the field.

To accommodate the large field, the debates will occur over two consecutive nights in prime time, and capped at 20 candidates. In deciding the final 20 debate participants, candidates crossing both the polling and fundraising thresholds rank over candidates who only crossed one. The remaining debaters qualify based on polling performance. 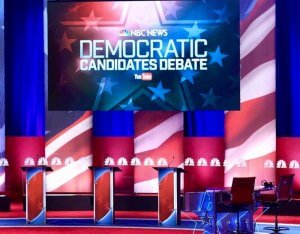 Qualifying candidates are split into two groups, those polling at or above 2%, and those below, and will be randomly and evenly divided among the two nights. Within each night, candidates are positioned from the center-out according to their polling numbers.

The DNC determines the qualifiers, and the host network conducts a manual draw of names to determine the order. Representatives of each campaign are invited to view the draw in person.

The format provides candidates with 60 seconds to answer questions and 30 seconds to respond to follow-ups. There will be no opening statements, but candidates will have a chance to deliver closing remarks.

Polls must be among approved national or early state polls in Iowa, New Hampshire, South Carolina, and/or Nevada. Any qualifying poll must include a full list of presidential candidates for respondents.

The Candidate Count
With the exit this week of Congressman Eric Swalwell (CA), and the entrance of billionaire activist Tom Steyer, there are now a net 25 Democratic candidates in the 2020 race for the White House.

April 12, 2019 The first results are In! In the first full quarter reporting period since most of the 2020 presidential contenders announced, candidates have begun to release the results of their...

DemDaily #tbt: “A Day That Will Live In Infamy”

If you were to compile a list of the most impactful Democratic leaders in the history of our nation, the number one spot would almost certainly be filled by President Franklin Delano Roosevelt.