The country is now over a year and a half into the deadly coronavirus pandemic that has claimed the lives of almost 660,000 Americans.

While daily COVID deaths in the United States have risen to 1,500 amid the surge of the much more infectious Delta variant, hospitalizations and reports of new cases are starting to level off as more Americans are getting vaccinated.

The Vaccinated
The Center for Disease Control (CDC) reports demographic characteristics, including race/ethnicity, of people receiving COVID-19 vaccinations at the national level. 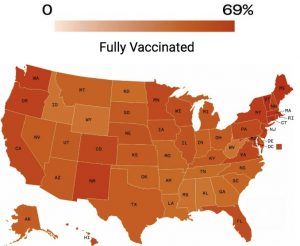 As of September 8, 2021, the CDC reported that race/ethnicity was known for 59% of people who had received at least one dose of the vaccine.

Among this group, nearly two-thirds were White (60%), 10% were Black, 17% were Hispanic, 6% were Asian, 1% were American Indian or Alaska Native, and <1% were Native Hawaiian or Other Pacific Islander, while 5% reported multiple or other race.

The Unvaccinated
According to the Cleveland Clinic, unvaccinated patients account for 99.75% of those hospitalized. Despite that fact, there are still segments of the population that refuse the treatment.

According to the Kaiser Family Foundation COVID-19 Vaccine Monitor, unvaccinated adults fall into two distinct groups -- those who are open to getting a vaccine ("wait and see") and those who say they will definitely not get a COVID-19 vaccine.

Among the two, the demographic differences center on racial and ethnic identity and political partisanship. 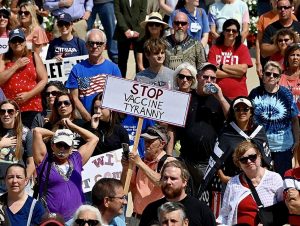 The Face of the Unvaccinated: Protest in Michigan (Dale Young)

A mini vaccination surge has followed the rise of the COVID-19 Delta variant in the US, especially among Black and Hispanic Americans, suggesting a narrowing of racial gaps in vaccinations at the national level. Individual states, however, are still generally lagging among minority populations, despite a greater supply of vaccines across the country. 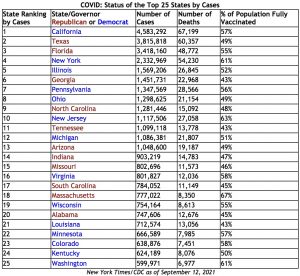 Where To Get Vaccinated In Your State
Check out: Incentives in Your State