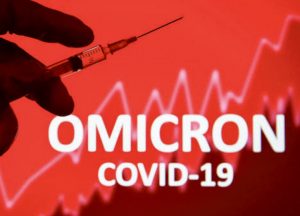 The country is now almost two years into the deadly coronavirus pandemic that has claimed the lives of over 800,000 Americans.

Six months ago, just as Americans were welcoming signs of a return to normalcy, the highly infectious Delta variant emerged, and with it, a new resurgence in cases and hospitalizations - almost exclusively among those who had not been vaccinated.

Now, with the rapid spread of the far more infectious Omicron variant in the last two weeks, the Center for Disease Control (CDC) is predicting a major surge by the end of Christmas week. Health officials predict a 55% surge in daily infections and a potential 71% rise in the daily death toll.

Omicron cases are doubling every two to three days, compared to Delta, which doubled every 14 days when it first entered the US in June. 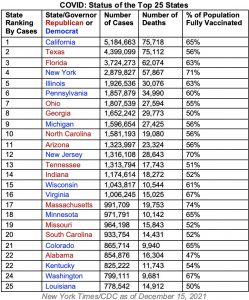 The Omicron variant, first identified in South Africa November 25th, has now been detected in 33 US states. While vaccines are still preventing hospitalizations and death, natural immunity from having had COVID does not protect an individual from Omicron.

Despite universal access to vaccinations, the US still struggles to convince a percentage of Americans to protect themselves, which continues to play out under a partisan political divide.

Of the top twenty states with the lowest vaccination percentages, 16 are run by Republican Governors.

While the United States tops the world count in both cases and deaths, it is ahead of a majority of countries with 61% of its citizens fully vaccinated, and with vaccinations readily available to every American citizen over the age of five.

Worldwide, there have been 272,217,900 reported cases and 5,328,693 deaths.
Worldwide, approximately 58% of the world population has received at least one vaccine dose.

Processes for administering vaccines, however, vary greatly, as does access. Only 1% of people in low-income countries have received at least one dose.

The United States has accelerated delivery of 200 million vaccine doses around the world as a part of President Biden's "action plan" to combat COVID-19. 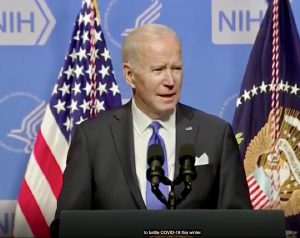 Insurers will cover 100% of the cost of at-home tests for Americans with private insurance, and 50 million tests are being sent to communities nationwide to cover uninsured and Medicare/Medicaid beneficiaries.

The administration is also deploying emergency surge response teams to help treat COVID patients and has imposed mandatory testing for all travelers entering the US.

Biden, noting the plan "doesn’t include shutdowns or lockdowns," said, “We’re going to fight this variant with science and speed, not chaos and confusion...This is a moment we can put the divisiveness behind us, I hope.”

Where To Get Vaccinated In Your State