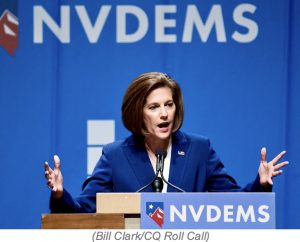 Silver State Politics
The western battleground state, which Biden won by 2.39%, has voted with every winning presidential candidate for the last thirty-six years with the exception of 2016, when Hillary Clinton won the state 47.9% to 45.5% over Donald Trump.

Although Democrats currently control both US Senate seats and the Governor's mansion, the independent voters of Nevada have historically split their preferences between the parties in statewide offices. 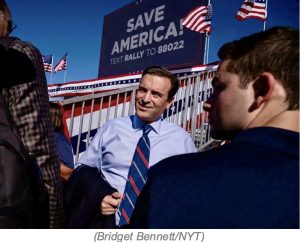 A former criminal prosecutor in the US Attorney's office, Cortez Masto was elected as state Attorney General in 2006 and reelected by 16 points in 2010.

Her 2022 GOP opponent, Adam Laxalt, who succeeded her as Attorney General in 2014, hails from a Republican political dynasty. He is the son of former US Senator Pete Domenici (R-NM) and the grandson of former Nevada Governor and US Senator Paul Laxalt (R).

In 2020 Laxalt co-chaired former President Donald Trump's 2020 presidential reelection campaign in Nevada and joined in efforts to overturn the election results based on unsubstantiated claims of large-scale voter fraud.

Both Trump and the GOP establishment supported Laxalt in the June 2022 Republican primary, which he won with 56% over seven other contenders. 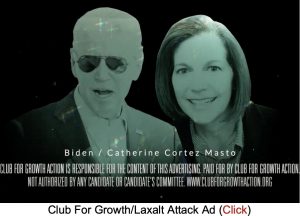 Cortez Masto, who served as Chair of the Democratic Senatorial Campaign Committee in the 2020 cycle, has proved prolific at fundraising. In the third quarter report ending September 30, she reported bringing in more than $15 million for a total of $45.44 million raised in the election, and $5.1 million cash on hand.

Laxalt raised $6.2 million in the third quarter for a total of $13.5 million and $4 million on hand.

Television ad spending in the race was roughly even between the parties over the last month, with outside GOP-alligned groups closing the money gap on behalf of Laxalt.

Ultra-conservative Club for Growth, which has poured over $14 million into the race, released an ad last week attempting to tie Cortez Masto to Biden's "soaring inflation" and the rise in gas prices.

Cortez Masto's most recent campaign ads attack Laxalt on his anti-abortion stance. She has also benefited from outside spending by groups including Latino voter mobilization Somos PAC, Women Vote!, and LCV Victory Fund. 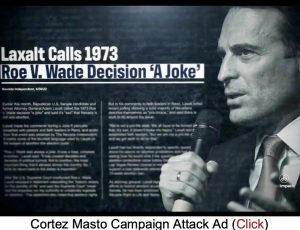 Also on the ballot is the reelection of Nevada incumbent Democratic Governor Steve Sisolak, who is in a statistical dead heat with Trump-endorsed challenger and Clark County Sheriff Joe Lombardo.

DemDaily: The Final Primaries: The House

All 435 seats in the US House of Representatives are up (Rs:246/Ds:187/2 vacancies) and, while the chances of wrestling control of the House from the Republicans is unlikely, we have learned...