In a dramatic testimony that tied together the threads of the entire Trump-Ukraine scandal, former US Ambassador to Ukraine Marie Yovanovitch became the third witness to speak publicly in the impeachment proceedings against President Donald Trump. 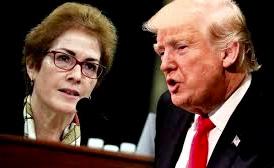 THE WITNESS
Marie "Masha" Yovanovitch is the daughter of Russian immigrants who fled to the United States when she was 3 years old.

Yovanovitch earned a B.A. in History and Russian Studies from Princeton University in 1980, studied at the Pushkin Russian Language Institute, and was awarded an M.S. from the National War College in 2001.

She was the highest-ranking woman in the State Department, with a decorated 33-year record in the foreign service that included serving as an ambassador under three presidents.

TIMELINE & TESTIMONY
Known as "a straight-arrow, disciplined, professional," Yovanovitch was outspoken about ending corruption in the Ukrainian government, pushing for numerous reforms that earned her a number of enemies within the country.

One of those was Ukrainian Prosecutor General Yuriy Lutsenko, who had succeeded Viktor Shokin as Ukraine's top prosecutor. Shokin, appointed by then-Ukrainian President Petro Poroshenko in February 2015, oversaw a tenure rife with "corruption and lawlessness," including blocking prosecutions against those accused of shooting demonstrators in the 2014 Ukrainian revolution, as well as other major cases against allies and influential figures. 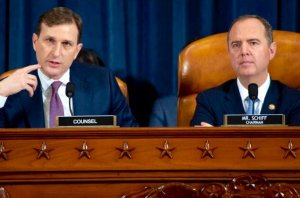 Following domestic and international pressure, including from the International Monetary Fund (IMF), the European Union (EU), and Vice President Joe Biden, on behalf of the Obama administration, Shokin was formally dismissed in a parliamentary vote in March, 2016.

Yuriy Lutsenko, formerly a Minister of Internal Affairs and Member of Parliament, was sworn in as the new Prosecutor General in May of 2016. Lutskenko's appointment was supported by the US in hopes that he would clean up corruption in Urkaine's political system.

Shortly after taking up her post in August, 2016, Ambassador Maria Yovanovitch met with Lutsenko, pressing the new prosecutor general to clean up corruption in his own office.

On June 8, 2017 President Trump's personal attorney, Rudy Giuliani met with President Petro Poroshenko and Lutsenko, among other officials, during a visit to Kyiv.

On July 25, 2017 President Trump issued a public call for an investigation of "Ukrainian efforts to sabotage Trump campaign -`quietly working to boost Clinton.' The tweet was referenced in Special Counsel Robert Mueller's report on possible obstruction of justice by the US President to block the investigation into Trump campaign collusion with Russia's 2016 election interference.

In late 2017, a major Trump donor and lobbyist for a Ukrainian company started to pressure State Department officials to fire Yovanovitch. 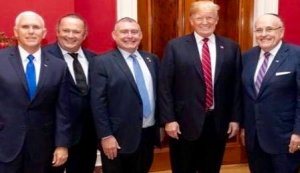 Giuliani's Ukrainian-American business associate Lev Parnas, in an April, 2018 dinner with President Trump, told the President that Yovanovitch was "unfriendly" his interests.

Parnas and Fruman were later arrested in October, 2019 on federal charges of violating US campaign finance law, including illegally funneling funds to a PAC supporting Trump.

In late 2018, Parnas and Fruman arranged a Skype call between Giuliani and Shokin, and later, Lutsenko.

According to Lutskenko, Giuliani pressed him repeatedly to open an investigation on former Vice President Joe Biden and his son Hunter, who sat on the board of Ukrainian company Burisma. Prior to the junior Biden's appointment to Burisma, the company had previously been under scrutiny but was cleared of any wrongdoing.

In late 2018 Yovanovich was informed that Rudy Giuliani, President Trump's personal attorney, had met with Lutsenko multiple times about plans to the ambassador.

Following the November, 2018 death of Ukrainian politician and activist Kateryna Handziuk from an acid attack, human rights organisations and NGOs demanded Lutsenko resignation, but it was rejected by President Petro Poroshenko.

Giuliani met again with Lutsenko in January, 2019, questioning Yovanovitch's loyalty and pressing him for investigations in Burisma and the Bidens.

In February, 2019 Yovanovitch was warned by a concerned Ukrainian official about Giuliani's efforts, and told that she needed to watch her back, because Giuliani, Parnas, Fruman, and Lutsenko wanted a different ambassador.

In early March, despite the efforts of Trump's allies to remove Yovanovitch, her superior at the State Department asked her to extend her tour in Ukraine for a year.

In a March 2019 speech, Ambassador Yovanovitch said, "It is increasingly clear that Ukraine's once-in-a-generation opportunity for change has not yet resulted in the anti-corruption or rule of law reforms that Ukrainians expect or deserve."

On March 20, 2019, Conservative columnist John Solomon published an interview with Lutsenko, who alleged that Yovanovitch gave him a "do not prosecute" list at their first meeting. The State Department says the claim was "an outright fabrication." In the interview Lutsenko also raises allegations against Biden and Burisma, and says he wants to present his information to Attorney General William Barr.

On March 28, 2019, Rudy Giuliani gave Secretary of State Mike Pompeo a nine-page document with a detailed timeline of the Bidens' dealings in Ukraine and allegations of impropriety against Yovanovitch, saying she was 'very close' to Mr. Biden. Pompeo promised to investigate, requesting additional documents.

On April 21, 2019 Volodymyr Zelensky, who ran on a "zero tolerance" anti-corruption agenda, is elected the new President of Ukraine.

On April 25, 2019, after further complaints from Giuliani and other Trump allies that Yovanovitch was undermining and obstructing Trump's efforts to persuade Ukraine to investigate the Bidens, President Trump ordered Yovanovitch's recall.

Yovanovitch testified that, in Washington, she was told by Deputy Secretary of State John Sullivan that "the President had lost confidence in me and no longer wished me to serve as his ambassador. He added that there had been a concerted campaign against me, and that the Department had been under pressure from the President to remove me since the Summer of 2018. He also said that I had done nothing wrong."

Giuliani told a Ukrainian journalist in an interview published May 14, 2019 that Yovanovitch was "removed ... because she was part of the efforts against the President." 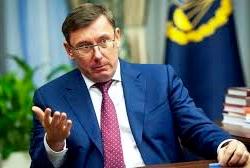 General Prosecutor Yuriy Lutsenko, at heart of Yovanovich plot, was dismissed from his position by parliament in August, 2019

In a July 25, 2019 call with President Zelensky, Trump referenced Yovanovitch, saying "The former ambassador from the United States, the woman, was bad news and the people she was dealing with in the Ukraine were bad news so I just wanted to let you know that...she's going to go through some things. I will have Mr. Giuliani give you a call and I am also going to have Attorney General [William] Barr call and we will get to the bottom of it."

Trump also praised Lutsenko to Zelensky, suggesting he should keep Lutskenko in his position.

In the same call, Trump reminded Zelensky of the pending US assistance to Ukraine and repeatedly pressed the new Ukrainian president to to work with Attorney General Willam Barr and his personal attorney, Rudy Gulliani, to open an investigation into the Bidens.

The anonymous whistleblower complaint references the circumstances of Yovanovitch's departure, stating that "several US officials told me that, in fact, her tour was curtailed because of pressure stemming from" Lutsenko.

Masha's career in the foreign service may be over, but not her role as a "corruption buster." 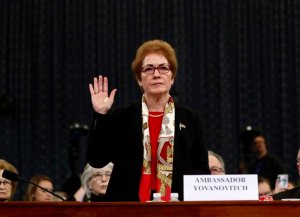 March 10, 2020 The endorsement of elected officials, newspaper, major labor and organizations, has traditionally been a major predictor of success for candidates in presidential primaries, but...