The Presidential season is well underway with a dozen announced or declared candidates, including the entry of a fifth woman into the race Sunday, marking an historic number of women running for President. In 2016, Hillary Clinton was the first, and only, woman ever to become a major-party nominee for president. 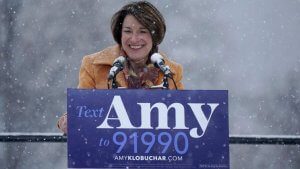 "I stand before you as the granddaughter of an iron ore miner, the daughter of a teacher and a newspaperman, the first woman elected to the United States Senate from the state of Minnesota, to announce my candidacy for president of the United States," Klobuchar declared to supporters in 19 degree weather.

Traditionally presidential contenders open an exploratory committee and declare their intention to run, then follow within a month or so with a formal announcement and event to maximize extended media coverage.

With a 24/7 media-driven electorate and daily coverage, however, some of the candidates, like Klobuchar, have opted for one main event.

As anticipated, the field of Democratic hopefuls has narrowed, as potential candidates weigh the merits of running in the current environment and how to distinguish themselves amongst the current field. With the entrance of just one or two other major contenders, the political dynamics could shift dramatically. Any serious contender is likely to jump in by the end of March. 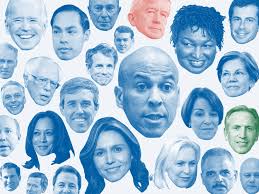 Who Is Not In Yet?

Latest Standings
A Monmouth University Poll, conducted January 25-27, 2019 of registered voters nationwide who are Democrats or lean Democratic (Margin of error ± 5.5), asked respondents,"I know the 2020 election is far away, but who would you support for the Democratic nomination for president if the candidates were the following?" Options rotated. Results include leaners.

February 18, 2019 Today is Presidents Day!  The federal holiday, officially named “Washington’s Birthday,” was established in 1885 in honor of George Washington, who was born on...