Less than 24 hours after the impeachment of President Donald J. Trump, the top democratic candidates running to replace him graced the stage at Loyola Marymount University in Los Angeles, California for the Sixth Democratic Presidential Primary Debate.

The debate, co-hosted by PBS NewsHour and Politico, was the last of 2019 and the smallest one to-date, with seven contenders and only one candidate of color. 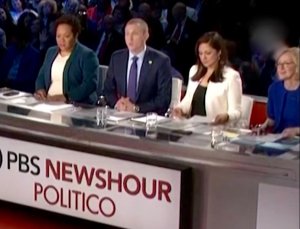 Racial politics was one of the many issues covered, along with campaign finance, the economy, education, immigration, climate change, international affairs and, of course, healthcare.

With more time to individually shine, the candidates expanded on their promotion, and defense, of individual plans, while lobbing an occasional attack.

Most put in moderate to admirable performances that are not likely to alter their polling status, with the exception of Senator Amy Klobuchar who was given top marks for the night.

The Highlights
The first question, on impeachment, was predictable -- as were the answers.

Joe Biden, who had one of his steadier debate performances, said, "Is it any wonder that if you look at the international polling that's been done, that the Chinese leader is rated above the American president? Or that Vladimir Putin congratulated him, saying stand fast and that in fact it was a mistake to impeach him...My job is to go out and make the case why he doesn't deserve to be president of the United States for another four years."

Bernie Sanders was characteristically competent and straightforward, "We have a president who is a pathological liar...who is running the most corrupt administration in the modern history...who has sold out the working families of this country, who wants to cut Social Security, Medicare and Medicaid after he promised he would not do that, and who has documentedly lied thousands of times since he is president." 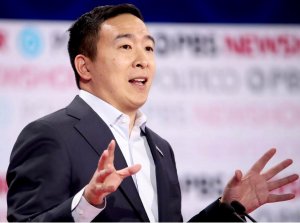 Andrew Yang was effective throughout the evening, going beyond his previous reliance on soundbites. "What we have to do is we have to stop being obsessed over impeachment, which unfortunately strikes many Americans like a ballgame where you know what the score is going to be, and start actually digging in and solving the problems that got Donald Trump elected in the first place."

Elizabeth Warren scored one of several decisive moments when asked by Judy Woodruff about one of her signature proposals, a tax increase on the wealthy. In reference to Warren's "especially ambitious" plan, Woodruff asked, "How do you answer top economists who say taxes of this magnitude would stifle growth and investment?"  Warren: "Oh, they're just wrong."

On the economy and USMCA, the bipartisan trade agreement among the United States, Mexico and Canada that passed in the House yesterday, Sanders said that, while it makes "modest improvements," he would not be voting for it because "at the end of the day...it is not going to stop outsourcing."

Quick to draw a distinction, Amy Klobuchar said she plans to vote yes when it comes to the Senate, evoking the name of Ohio Senator Sherrod Brown, who is close to labor and supports the legislation. 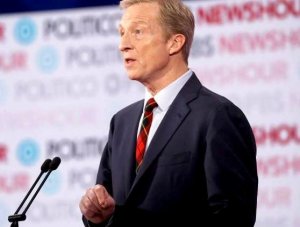 Tom Steyer had his moments

Sanders also noted that "the word 'climate change' is not discussed" in the new agreement, another reason he would be voting no.

On climate change, Tom Steyer took one of his few moments of the night to speak to his signature issue.
"I've been working on this for more than a decade. I've taken on oil companies and beaten them on environmental laws. I've pushed clean energy...Not only can we clear up the air and water in the black and brown communities...this is also the opportunity to create literally millions of middle-class union jobs, well-paid, across America. Our biggest crisis is our biggest opportunity."

Tim Alberta's question on a recent statement by former President Barack Obama drew lively response. Quoting Obama: "If women were in charge, you would see a significant improvement in just about everything...if you look at the world and look at the problems, it's usually old people, usually old men not getting out of the way."

Sanders, the oldest candidate on stage, "respectfully" disagreed, joking "I'm white as well." It "may be a little self-serving, but I do disagree. Here is the issue: The issue is where power resides in America, and it's not white or black or male or female. We are living in a nation increasingly becoming an oligarchy, where you have millionaires buying elections and politicians." 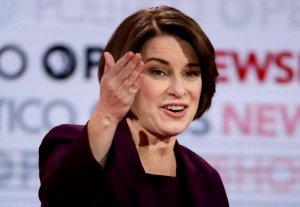 When Alberta said he guessed Obama didn't clear his remark with the former vice president beforehand, Biden quipped, "I'm going to guess he wasn't talking about me either."

When Alberta turned to Warren, saying "You would be the oldest president ever to be elected ..."
Warren quipped: "I'd also be the youngest woman ever inaugurated," drawing huge applause.

Yang's response to his status as the only candidate of color on the stage was again notable. "It's both an honor and disappointment to be the lone candidate of color on the stage tonight. I miss Kamala, I miss Cory, though I think Cory will be back."
Yang said he grew up with racial discriminaton, "but black and Latinos have something much more powerful working against them than words. They have numbers. The average net worth of a black household is only 10% that of a white household. For Latinos, it's 12%. If you're a black woman, you're 320% more likely to die from complications in childbirth. These are the numbers that define race in our country." He then segued into his freedom dividend as the fix.

The most pointed exchange of the evening came between Warren and Buttigieg on campaign finance reform. Warren, who has criticized other candidates for traditional high-dollar, high-access fundraising, went after Buttigieg on an exclusive event held in a wine cave with $900 bottle wines.

Warren: "Billionaires in wine caves should not pick the next president of the United States, Mr. Mayor." 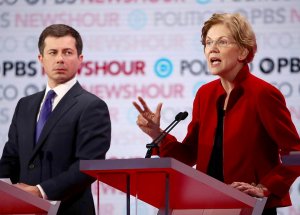 Buttigieg hit back, pointing out that he was "literally" the only candidate onstage who isn't a millionaire or billionaire. He then charged that Warren, who transferred millions raised at big-dollar fundraisers from her Senate campaign to her presidential bid, with hypocrisy. "This is the problem with issuing purity tests you cannot yourself pass."

Klobuchar followed with, "I did not come here to listen to this argument. I came here to make a case for progress. And I have never even been to a wine cave. I've been to the wind cave in South Dakota, which I suggest you go to."

Buttigieg, whose numbers have been rising in early state polls, was also a target of Klobuchar on experience -- comparing his tenure as a local official to "the hundred years of experience on this stage," which he purportedly mocked in the last debate.

Noting Buttigieg lost an earlier race for Treasurer of Indiana, and for his run for DNC Chair, Klobuchar said, "we should have someone heading up this ticket that has actually won, and (is) able to show that they can gather the support you talked about."

Buttigieg: "Do you want to talk about the capacity to win? Try putting together a coalition to bring you back to office with 80% of the vote as a gay dude in Mike Pence's Indiana." 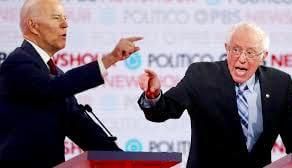 Healthcare took a smaller role in this debate, with a predictably heated exchange between Biden and Sanders over the cost of their respective plans.

At one point Sanders attempted to interrupt Biden.
Biden: "Hey, put your hand down for a second, Bernie, OK?"
Sanders: "Just waving to you, Joe. Saying hello." Biden: "I know."

In his closing remarks, Biden summed it up: "It seems to me, we have to ask ourselves three questions straight up and honestly. Who has the best chance...of defeating Donald Trump?...Number two, who can help elect Democrats to the United States Senate in states like North Carolina and Georgia and Arizona and other states? And thirdly, who can deliver legislatively?... But most of all, we've got to level with the American people. Don't play games with them. Tell them the truth and be authentic."

October 15, 2020 The confirmation hearings for the nomination of Amy Coney Barrett to be the next Supreme Court justice concluded today, wrapping up four days of testimony before the Senate...