The second quarter numbers for the 2020 presidential contenders have been released, further expanding the divide between the first tier of five candidates and the remainder of the field.

Pete Buttigieg topped the field with an astounding $24.9 million, more than triple his first quarter haul, and frontrunner Joe Biden reported a respectable $22 million for his first reporting since entering the race.

The most notable drop, however, was that of former Congressman Beto O'Rourke, whose numbers dropped by two-thirds, deflating a 2020 bid that started strong following his narrow 2018 defeat to incumbent Republican Ted Cruz in all-important electoral state Texas.

Why It Matters
In what is expected to be an historically expensive race for the White House in 2020, early fundraising totals are viewed as an indicator of a candidate's viability.

Similarly, their ability to maintain or improve upon on their reporting figures shows momentum for their campaigns and an ability to break through a crowded field of high-caliber contenders.

These figures not only separate them from the rest of the field, but are an indicator of the resources on-hand to further fuel their ability to fundraise and expand their operation on the ground, online and on air. 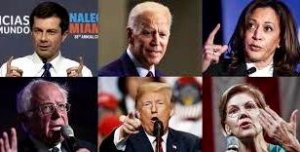 What Else Matters
The amount of money spent, or the "burn rate," compared to the amount taken in, is also a reflection of the health of a campaign.

Ten of the 23 Democratic candidates who filed a second quarter report spent more than they raised during that period.

Those candidates, all in the second tier, are expected to stay in through the second Democratic debate July 30th and 31st in Detroit, Michigan, in hopes of getting a fundraising and polling boost from their performances.

Under the Democratic National Committee's (DNC) debate qualifications, however, the threshold for the third debate, September 12th and 13th in Houston, Texas, doubles.  Contenders must also meet the qualifications for both fundraising and polling, when we can expect to see the most significant winnowing of the field.

Additionally, while money may indicate a depth of dedicated support, it doesn't necessarily mean breadth. While Buttigieg outraised the other top contenders, he ranks only 4.8% in the most recent polls -- lagging far behind his next closest competitor, Harris, at 13.4%.

The Larger Picture
President Trump, who been raising reelection funds since he entered office in January, 2017, has amassed a total of $135.6 million, $26.5 million of which was raised in the last quarter. He has $56.7 million cash-on-hand.