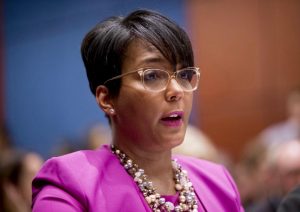 The Democratic Party's Draft Platform was released this week, outlining the official plank of issues and policy goals that define what it is to be a Democrat.

The 80-page document was produced by the Democratic Platform Drafting Committee, a 15-person panel appointed by the DNC Chair, including members of the Biden-Sanders Unity Task Force, which offered its own recommendations July 8th.

The draft reflects the unprecedented political, civil and health crises of the last three and a half years under Donald Trump, and underscores the party's shift since 2016 to a more progressive platform.

Although it comes far short of the more radical change originally advocated by former Biden presidential rival Senator Bernie Sanders, it is a concensus document that was born of their joint efforts.

On the international front, it proposes a tougher stance on China and "other state actors (who) steal America's intellectual property," and engage in "cyberespionage," opposes "regime change," advocates for "less" spending on national defense, and promises the end to "forever wars" in places like Afghanistan.

The document calls for rejoining the Paris Climate Accord and reentering the Iran nuclear agreement, but steers clear of fracking or oil drilling.

The draft also includes a new proposal for a national commission to study slavery reparations and the lasting effects of other forms of institutionalized racism.

Although the non-binding document is a largely a symbolic one, it is critically-crafted as a message to the American people just one month before Democrats formally nominate Joe Biden as our nominee, and less than four months before what promises to be our country's most historic presidential election.

The draft was sent to party members Tuesday in advance of next Monday's July 27th meeting of the full Platform Committee, a body of 187 delegates which includes representatives from each state.

The committee will vote on further amendments to a final platform before sending it to the full body of convention delegates, which traditionally votes on its passage at the Democratic Convention. 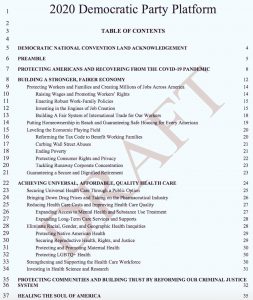 The coronavirus pandemic, however, has forced this year's August 17th-20th convention, anchored in Milwaukee, Wisconsin, to become the country's first virtual political convention.

Under a new remote voting system that "allows convention delegates to safely and securely cast ballots for all required votes," the delegate vote will begin on August 3rd and will end on August 15th.

Other votes address the Convention Rules Committee reports and recommendations, as well as that of the Credentials Committee, wrapping up most official party business, except for the nominations, before the actual convention.

By contrast, Republicans, for the first time in their party's history, have abandoned creating a new platform altogether, deferring to their 2016 plank.

Check Out: The 2020 DemList Convention Calendar, now up and open for free submission of your virtual events, webinars, trainings and caucuses leading up to, and during, the August 17-20 Convention -- now just 25 days away! We are working with the DNCC to post official party activities as they become available.

January 28, 2019 Women compose 51.9% of the American population, 53% of the voting population, and four women have announced their candidacies for President of the United States. However, as we...

Yesterday’s DemDaily: Swing States Update! provided an update on polling in the top 15 battleground states going into the election; but one additional state is in play for the first time in...