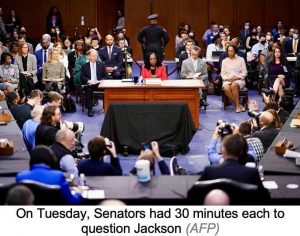 Compared to Monday's relatively amicable opening statements and proceedings, all gloves were off in Tuesday's hearings as Senate Judiciary Committee members began their public scrutiny of Jackson's record, rulings and judicial philosophy, amid volleying between partisan members on points of contention.

Senators each had 30 minutes to question Jackson, with several using that time to decry the ills of the Biden administration and previous Supreme Court nomination processes under Democrats. 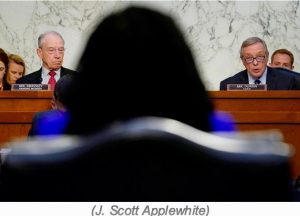 Durbin countered the statements, pointing to Hawley's support of a Trump-nominated federal judge who imposed sentences below guidelines 77% of the time, compared to 80% in the DC District Court where Jackson served.

Durbin also preempted Republicans' questions on whether Jackson supported "court-packing," or expanding the size of the High Court. Jackson told the committee she agrees with now-Justice Amy Coney Barrett, saying her "north star" is the appropriate role for a judge in the current constitutional framework. "In my view, judges should not be speaking to political issues and certainly not a nominee for a position on the Supreme Court." 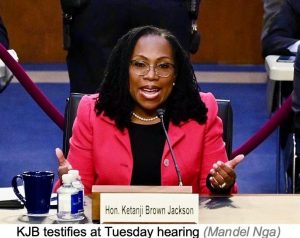 Of her judicial philosophy, Jackson responded, "Our obligation as judges is not to create policy...the charge of the judge is to interpret the law as written."

It was a line she would be forced to repeat numerous times to GOP members more concerned with addressing a national audience and broader presidential issues than those actually applicable to the High Court or the nominee. 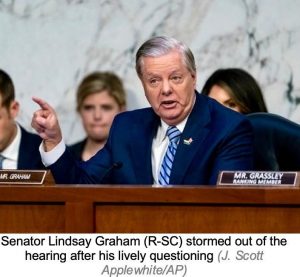 South Carolina Senator Lindsay Graham (R) was among the most temperamental and dramatic in his questioning, choosing to regale the audience with a list of abuses suffered by past judicial nominees at the hands of Democrats on the issues of faith, family and their associations.

Graham, who asked Jackson to rate her faith on a scale from one to 10, complained of "two standards," alluding to the treatment of Barrett during her nomination hearing for expressing her conservative faith. "Our people deserve better respect," declared Graham.

Graham went on to assail "left-wing radical" groups like Demand Justice, American Progress, Arabella and Our Revolution while asking Jackson, ""Did you notice people from the left were cheering you on?" he asked Jackson. She replied, "Senator, a lot of people were cheering me on."

Graham then turned to "Gitmo," criticizing Jackson's defense of Guantanamo detainees as a public defender and attorney. 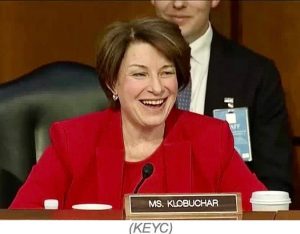 Rebuking Graham, Jackson said that signing on to the habeas corpus brief did not make those arguments her arguments, quoting comments made by Chief Justice John Roberts, “When you are an attorney, and you have clients who come to you - whether they or not - you represent their positions before the court.”

Jackson's unique experience as a public defender and trial lawyer was touted by several Senators, including Senator Patrick Leahy (D-VT), who said it "has made you a better judge, maintaining impartial perspectives in criminal and other cases."

Senator Amy Klobuchar (D-MN), a former public prosecutor herself, echoed that praise, along with Jackson's family experience with law enforcement. Jackson’s brother served with the Baltimore Police Department, one uncle was a uniformed detective, and another the former City of Miami Police Chief. 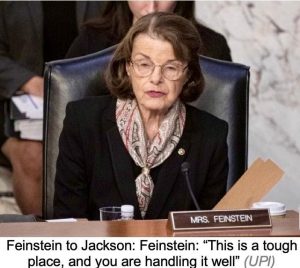 Klobuchar pointed to Jackson's endorsement from the Fraternal Order of Police which stated, "There is little doubt that she has the temperament and legal experience and family background to have earned this appointment. We are reassured that should she be confirmed, she will approach future cases with an open mind and treat issues related to law enforcement justly."

Senator Diane Feinstein (D-CA) noted, as well, the enthusiastic endorsement of the International Association of Chiefs of Police, then dove head-on into the critical issue of abortion before the current Supreme Court and the threat to overturning the landmark 1972 Roe v. Wade decision.

Jackson confirmed that she adhered to the legal concept of stare decisis, or precedent, saying, "Roe and Casey are the settled law of the Supreme Court concerning the right to terminate a woman's pregnancy. They have established a framework that the Court has reaffirmed." 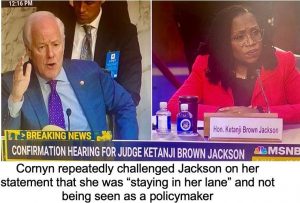 Gay marriage was the target for Senator John Cornyn (R-TX), saying the Supreme Court’s landmark 2015 decision in Obergefell v. Hodges, which legalized the act, created a new enumerated right not explicitly stated in the Constitution.

Pressing Jackson, Cornyn, asking, "Do you agree with me that marriage is not simply a governmental institution, it's also a religious institution?" - which creates a conflict for religious people.

Jackson responded, "Well Senator, that is the nature of a right. When there is a right it means that there are limitations...the Supreme Court has interpreted the right to due process (under the 14th Amendment) as not just procedural but personal actions like marriage, children, travel, abortion, etc."

Cornyn then shifted to her defense of a Guantanomo Bay prisoner who was a member of the Taliban, claiming that Jackson called then-Secretary of Defense Rumsfeld and President George W. Bush war criminals in a related legal filing." Jackson responded that she didn't remember that particular reference, and Senator Dick Durbin later confirmed that staff was unable to find any record of such a statement.

Senator Sheldon Whitehouse (D-RI) kicked off his time quoting Jackson’s former boss, Judge Bruce Selya, who serves on the First Circuit Court of Appeals and said of Jackson, "She is absolutely everything you want in a Supreme Court Justice...I see some of the same qualities in her that I saw in Ruth Bader Ginsburg: humility, the way to inspire others in a quiet way, not at the top of your voice."

Whitehouse then launched into a lengthy narrative about the “dark money” conservative network engaged in judicial nominations. “I will be the first to concede there is dark money on both sides," he said, “but there is a difference between dark-money rooting for someone, and right-wing dark-money interests having a role in actually picking the last three Supreme Court justices.”

Whitehouse then offered visual charts showing how the conservative Federalists Society and its Donors Trust fund and network, known as "the dark-money ATM of the right, a Koch brothers affiliated organization" which has funneled an estimated $400 million to "conservative activists behind the scenes campaign to remake the nation’s courts.” 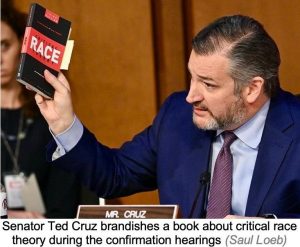 Senator Ted Cruz’s (R-TX) openly contentious line of questioning started with an attack on Critical Race Theory (CRT) and his unsuccessful attempts to tie Jackson’s past statements and association to the academic theory.

As proof, he offered that Jackson had called “The 1619 Project," a Pulitzer Prize-winning New York Times project that examines US history from the date when enslaved people first arrived on American soil, “provocative.”

Cruz went after Jackson's position as a board member of Georgetown Day School in Washington, DC and, in a show-and-tell, brought out copies of books taught from the school's library he alleged taught CRT. Jackson reminded Cruz that Georgetown Day was a private institution, just like the religious school board of trustees that Justice Barrett sits on. 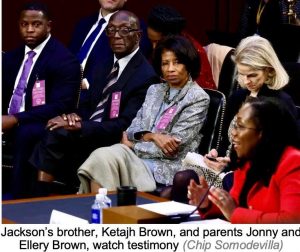 She added that the school was formed by three Jewish families and three Black families - with social justice at the core of its mission. "It's a private school such that every parent who joins the community does so willingly with the understanding that they are joining a community that is designed to make sure that every child is valued...and that none are discriminated against because of race."

Senator Chris Coons (D-DE), reading from an endorsement letter from 24 conservative lawyers, said "These conservative lawyers want this committee to know that you're judicious and evenhanded and recommended to the Supreme Court without reservation, despite having noted they differed with you concerning some political and bipartisan issues."

He Coons asked Jackson to clarify the factors she considers in framing her decisions. 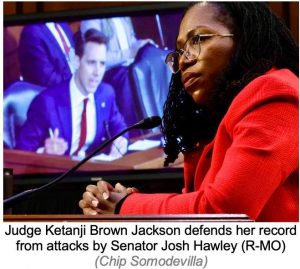 Durbin added that Jackson has the endorsement of the National Coalition Against Domestic Violence and nine separate organizations representing both survivors of violence and domestic sexual assault.

Senator Josh Hawley (R-MO) returned to his unrelenting attacks on Judge Jackson’s alleged lenient sentencing record of child pornographers, a claim tied to conspiracy theories he has promoted, and which have been debunked by experts. Jackson pushed back on the distortion of her record, noting that judges have to determine how to sentence defendants consistent with the requirements that Congress has set forward. "Sentencing is a discretionary act of a judge, but it's not a numbers game," she said.

Among the most intense of the interrogations came from Senator Tom Cotton (R-AR) on a series of crime-related matters, including whether or not the United States needs more police and whether she believes the US should weaken or strengthen sentences for drug crimes. 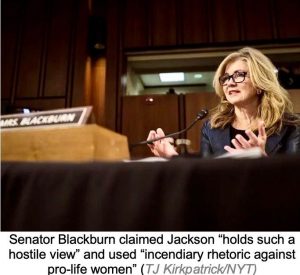 In each case, Jackson responded to Cotton that those were questions for Congress, not for a Supreme Court justice, which did little to deter his aggressive questioning, several times cutting off the nominee mid-sentence.

Senator Marsha Blackburn (R-TN) finished off the day with a rehash of attacks her GOP colleagues had lobbed at Jackson, including CRT, child pornography, abortion and gender identity.

Up Next
Wednesday's hearings, which commenced at 9:00am EDT this morning, will run through this evening.