The confirmation process of Joe Biden's Cabinet, the most racially diverse in history, is well underway, with six members having been confirmed and another 18 waiting in the wings at various stages of the process.

The Cabinet
Established in Article II, Section 2 of the Constitution, the Cabinet's role is to advise the President on any subject he may require relating to the duties of each member's respective office.

The Process
A presidential nomination is sent to the United States Senate for confirmation, where it is: 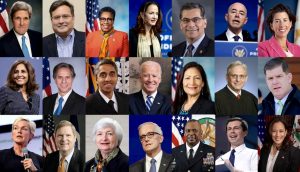 * Submitted first for review by the Senate committee relevant to the nominee's department.

*  The committee conducts public confirmation hearings on the nominee's credentials and policy positions, which may also include the testimony of supporters and opponents.

* If a majority of the committee approves, the nomination is "voted out" of Committee favorably, unfavorably or without recommendation and sent to the full Senate for a "floor" vote.

* Full Senate Vote: Once the Majority Leader schedules the vote, a simple majority (51) is required to confirm a nominee. If the vote is 50-50, the Vice President casts the tie-breaking vote.

The Count
Although the chamber, now led by Democrats after six years of Republican control, can be confident in confirming most, if not all, of the President's Cabinet nominations, some will not be without a fight. 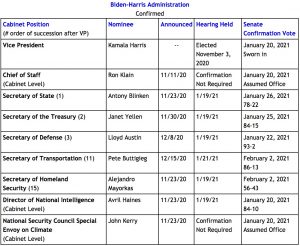 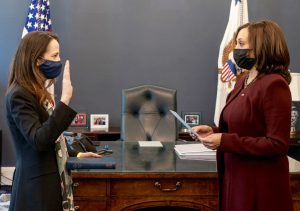 Director of National Intelligence Avril Haines was the first to be confirmed by the Senate, which agreed to fast track her nomination because of the nature of the intelligence post.

The most contentious nomination to-date was that of Alejandro Mayorkas as Homeland Security Secretary. The first Latino and immigrant to serve in the position, Mayorkas' nomination received push back from GOP Senators for his role as director of the US Citizenship and Immigration Services under President Obama, and concerns over how he will enforce related federal law in the Biden administration.  Mayorkas was confirmed 56-43. 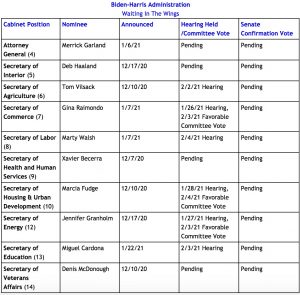 The Cabinet is the first tier of the approximately 4,000 presidential or "political" appointees, more than 1,250 of which require Senate confirmation, and include "key" positions, including deputy and assistant secretaries, chief financial officers, general counsel and Ambassadors. 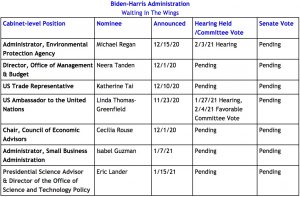 The Director of the Central Intelligence Agency, which is expected to be William Burns, is no longer a Cabinet-level position.

October 23, 2020 In the second presidential debate of the 2020 election, Joe Biden and Donald Trump went head-to-head on stage in Nashville, Tennessee Thursday night, sparring over issues and...