With the recent confirmations of Deb Haaland as Secretary of Interior, Xavier Becerra as HHS Secretary and Marty Walsh as Secretary of Labor, President Biden is close to confirming his final Cabinet. 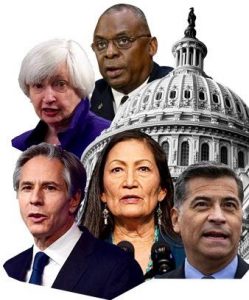 US Trade Representative Katherine Tai and SBA Administrator Isabel Guzman have also been confirmed in the last three weeks, bringing the Biden Cabinet count to 23.

Just two Cabinet-level positions remain unfilled. Eric Lander, the nominee for Presidential Science Advisor, has yet to have a Senate hearing, and a new nominee for Director of the Office of Management and Budget has yet to be named. 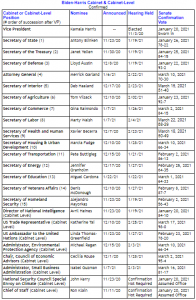 Presidents are required to fill roughly 4,000 politically-appointed positions in the executive branch and independent agencies, including more than 1,200 that require Senate confirmation.

While Donald Trump's refusal to acquiesce to a "peaceful transition" caused considerable delay in the process, Biden is still ahead of the game compared to his predecessors at this point in his first 100 days. Of the total number of appointees requiring confirmation, 29 have been confirmed and an additional 37 nominations are waiting in the wings in the US Senate.

June 5, 2018 Arthur Schlesinger, Jr. called him “the most creative man in American public life.” Ronald Reagan said, “He aroused the comfortable. He exposed the corrupt...