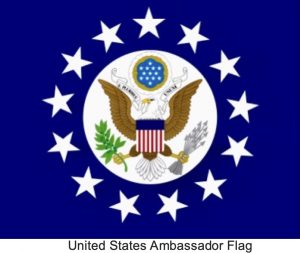 In a marathon session that ended at 4:00am last Saturday, the US Senate confirmed 41 ambassadors, nine federal judges, and five other senior positions, overcoming months of obstruction by Republicans on President Biden's nominees.

Of approximately 4,000 presidential or "political" appointees, more than 1,250 require Senate confirmation as part of its “advice and consent” responsibilities under the Constitution. These include cabinet members, chief financial officers, general counsels, ambassadors and other key leadership positions.

Although most nominees would have the required 50+ majority support, Republicans have successfully stalled some 150 confirmations by tieing up the process with floor debate while bargaining for their international priorities.

As of December 18, 2021, according to tracking by The Washington Post and Partnership for Public Service, 54 nominees have been confirmed, 34 nominees are being considered by the Senate, and 32 positions currently do not have nominees.

While GOP Senators, following intense final negotiations, agreed to release their hold on dozens of diplomatic appointments, dozens more still in the backlog will have to be renominated by the President in the 2022 session.

Our Ambassadors
US Ambassadors are individuals nominated by the President to serve as US diplomats to individual nations of the world, to international organizations, and as Ambassadors-at-large. As embassies fall under the State Department's jurisdiction, ambassadors answer directly to the Secretary of State. 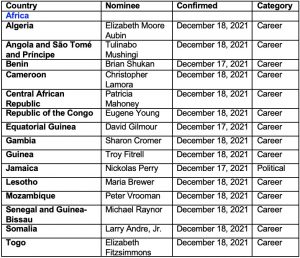 Ambassadors to foreign states include those to the Americas, Africa, Asia, Europe, the Middle East and Oceania.

High-profile confirmations include former Chicago Mayor and former White House Chief of Staff Rahm Emanuel as Ambassador to Japan, and Nicholas Burns, a career diplomat who served under both Republicans and Democrats administrations, as Ambassador to China.

Ambassadors to international organizations include those to the United Nations. Although UN Ambassador Linda Thomas Greenfield was confirmed in February, Ambassador to the European Union Mark Gitenstein was blocked until Saturday.

Others confirmed this month include former Delaware Governor Jack Markell as Ambassador to the Organisation for Economic Co-operation and Development, and famed "Miracle on the Hudson" pilot "Sully" Sullenberger as US Representative to the Council of the International Civil Aviation Organization.

Cindy McCain, wife of the late Senator John McCain, was confirmed as Ambassador to the United Nations Agencies for Food and Agriculture in October. 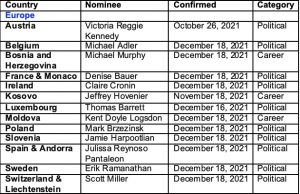 This month's confirmations include former associate White House counsel and former US Envoy to Muslim countries under President Obama Rashad Hussain as Ambassador at Large for International Religious Freedom, and Special Representative of the President for Nuclear Nonproliferation Adam Scheinman, who served in the same position under Obama.

Compared to Donald Trump, President Biden is now ahead by about 30 confirmations at this point in his presidency.

April 10, 2018 Over the next two days Facebook CEO Mark Zuckerberg will appear before Congress to answer questions about his company’s use and protection of user data. The bipartisan call to...

April 1, 2022  With the announcement Wednesday by Republican Senator Susan Collins (ME) that she will vote to confirm Judge Ketanji Brown Jackson to the US Supreme Court, President Biden’s...

July 13, 2017 This weekend the Democratic National Committee (DNC) kicks off another Day of Action around Resistance Summer, the Party’s campaign to unite Americans in the name of resistance...