With less than four months until the end of the 115th Congress, and with a record number of members departing the halls of the Capitol, the timing is right for a quick look at the outgoing crew.

The 115thCongress
The 115th Congress, as sworn in on January 3, 2017, is the most diverse in race and gender in history, as well as one of the most highly educated.  Women and minorities, however, are still far underrepresented in the nation's highest legislature. 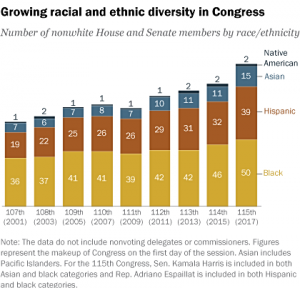 Racial Diversity
While the current Congress may claim credit for the record over its predecessors, the 19% of its non-white members is still only half the national number of 38% of the population.

Including Delegates, there are an unprecedented 51 African Americans (48 House/3 Senate) and 46 Hispanic/Latino (41 House/5 Senate).

Religion
When it comes to religion, more than 90% of members are identified as Christian, with approximately 56% identified as Protestant and 31% Catholic. 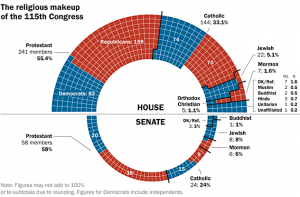 Education
A majority, 94%, of the members have a four-year degree and 65%+ hold higher educational degrees beyond a bachelor's.

This far outpaces the roughly 33% of American adults age 25+ that have college degrees or more. The most common prefession for senators is law, followed by public service/politics, then business, while for the House it is the reverse order.

In addition to those previously elected to other offices in the legislature, municipal or state government, a variety of professions have served as a springboard for the current office holders -- from physicians, dentists, veterinarians and ordained ministers, to a large contingent of educators, including coaches (85 in the House and 16 in the Senate).

Veterans
One area where representation has decreased considerably is military service. In the current Congress, approximately 19% of Members have served, compared to 1970, when approximately 70% of Congress had military experience.  The percentage, nevertheless, is still higher than the average share of Americans who served, which stands at approximately 8%.

Fortunately, the 116th promises to be even more diverse.

Sources: Pew, Congressional Research Service, Congressional Quarterly, Brookings Institute. *Figures may vary due to the shifting demographics of current members, due to the high turnover of lawmakers via resignations and special elections.

July 19, 2018 Former First Lady Michelle Obama is wading into the mid-terms wars with a new organization, When We All Vote. The non-profit, nonpartisan effort will focus on voter registration via...

DemDaily: DNC On The Road

March 30, 2018 Deputy DNC Chair Keith Ellison is taking the Democratic National Committee’s Winning With Partners tour to Michigan and Washington state over the next week. The Winning With...