The 117th Congress, as sworn in on January 3, 2021, is the most diverse in race and gender in history, as well as one of the most highly educated. 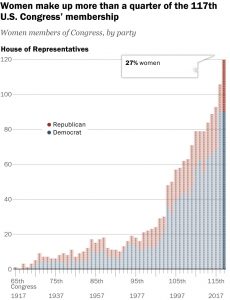 Women
There are 145 women in Congress, accounting for a record 27% of all members across both chambers.

There are 24 women in the Senate (16D, 8R), one fewer than the record number of seats they held in the last Congress.

In four states - Minnesota, Nevada, New Hampshire and Washington - both senators are women, down from six states in the previous Senate.

A record 121 women are currently serving in the House (89 D, 32 R), including four of the six nonvoting House members who represent the District of Columbia and the US territories.

The share of women in Congress, however, remains far below their share in the country as a whole, which stands at 51%.

History was made when Kamala Harris left the US Senate in January 2021 to become the first female Vice President of the United States.

Racial Diversity
Overall, 124 lawmakers identify as Black, Hispanic, Asian/Pacific Islander or Native American, for a total of 23% of Congress. 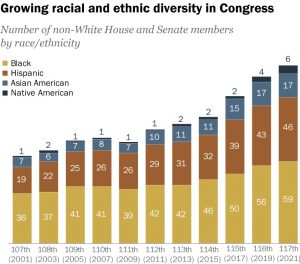 (Member who have one or more racial or ethnic identities are counted in each group. Pew)

This includes 11% in the Senate and 26% of the House of Representatives.

Including Delegates, there are an unprecedented 60 African Americans (3 Senate/57 House) and 52 Hispanic/Latino (6 Senate/46 House) members.

Congress, however, still remains less diverse than the nation as a whole: Non-Hispanic White Americans account for 77% of voting members in the new Congress, considerably more than their 60% share of the U.S. population.

Immigrants: There are 3% or 18 foreign-born lawmakers in the 117th Congress, including 17 in the House and just one in the Senate, Mazie Hirono, a Hawaii Democrat who was born in Japan.

That number goes up to 14% when you include members who are born to at least one parent who was born in another country. 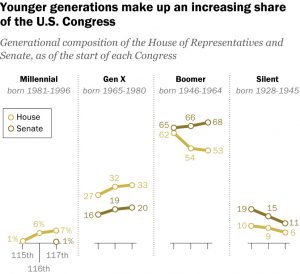 Older generations, however, still account for the majority of lawmakers across both chambers. Baby Boomers (born between 1946 and 1964) make up 53% of the House's voting membership, in addition to 68 of the 100 senators.

Education
The share of members of Congress with a college degree has steadily increased, with 94% of House members and all senators holding a bachelor's degree. Two-thirds of representatives and three-quarters of senators also have at least one graduate degree.

That level of education far outpaces that of the overall US population. According to the 2019 US Census, 36% of American adults ages 25 and older said they had completed a bachelor's degree or more education.

Religion
Congress has become slightly more religiously diverse. The 117th includes the first two Muslim women ever to serve in the House and has the fewest Christians (468) in 12 Congresses analyzed by Pew Research Center dating back to 1961. 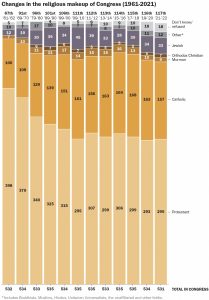 Despite this decline, Christians are still overrepresented in Congress in proportion to their share of the public: Nearly nine-in-ten congressional members are Christian (88%), compared with 65% of US adults overall.

By contrast, religious "nones" are underrepresented in Congress in comparison with the US population. While 26% of Americans say they are atheist, agnostic or "nothing in particular," just one lawmaker, Senator Kyrsten Sinema (D-AZ), says she is religiously unaffiliated.

Veterans
In the current Congress, 91 members served in the military at some point in their lives, the lowest number since World War II.

There are more than twice as many Republican veterans (63) in the new Congress as Democrats (28). Equal shares of Senate and House members (17%) have served in the military.

While the number and share of veterans in Congress overall have decreased, the newly-elected freshman class includes 15 such lawmakers.

While far fewer members of Congress now have direct military experience, they still exceed the average of 7% of Americans who do, down from 18% in 1980, not long after the end of the military draft era.

Help DemList with a Contribution Today
Follow DemList on Facebook, Twitter and LinkedIn
Sources: Pew Research, US Senate and House Galleries, Rutgers Center for American Women and Politics, FiscalNote, Legistorm, Military Times. Figures may vary slightly depending on date of research conducted since swearing-in of the new Congress in January 2021.

April 26, 2019 In a win for gerrymandering justice, a federal Court ruled Thursday that Michigan’s state legislative and congressional district map was unconstitutionally drawn to the...

December 17, 2019 Amidst the seemingly endless and contentious hearings regarding the impeachment of President Donald J. Trump, a little known voice to most Americans is making a rare appeal for...