Michael Cohen, President Trump's former personal attorney, wrapped up his third day of testimony before Congress today, providing lawmakers and the public a taste of what they may expect to see when Special Counsel Robert Mueller's report is released in the coming weeks. 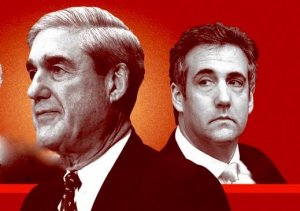 Cohen is one of 37 individuals who have been indicted or convicted, to date, in Mueller's 22-month investigation into Russia's interference with the 2016 presidential election and potential collusion with the Trump campaign.

In December, 2018, Cohen was sentenced to three years in prison after pleading guilty to nine federal charges including tax fraud, campaign finance violations and other charges stemming from secret payments to women who claimed they had affairs with Trump -- therefore attempting to influence the 2016 election at the direction of a candidate for federal office.

Now that Democrats have control of the US House, and the gavel to go with it, they are able to re-initiate inquiries related to the Russia-Trump case that were earlier blocked or shutdown by the previous Republican-controlled House.

He did not disappoint the audience.

Highlights
Cohen: "I know what Mr. Trump is. He is a racist, he is a conman, and he is a cheat."

Cohen: "Mr. Trump is a racist. When we were once driving through a struggling neighborhood in Chicago, he commented that only black people could live that way. And he told me that black people would never vote for him because they were too stupid."

Cohen: "Mr. Trump is a conman. He asked me to pay off an adult film star, with whom he had an affair, and to lie about it to his wife, which I did ... and I am going to jail, in part, because of my decision to help Mr. Trump hide that payment from the American people before they voted a few days later." 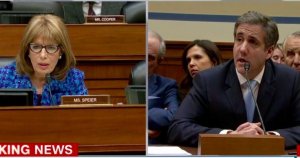 Cohen: "Alot of people have asked me if Mr. Trump knew about the release of the hacked documents of the Democratic National Committee emails ahead of time. And the answer is yes."

Cohen: "Mr. Trump called me a 'rat' for choosing to tell the truth, much like a mobster would do when one of his men decides to cooperate with the government." 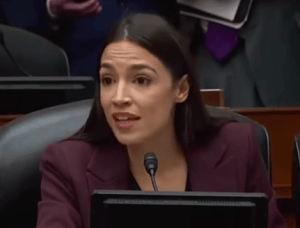 Congresswoman Alexandria Ocasio-Cortez (D-NY): "Did the President ever provide inflated assets to an insurance company?"
Cohen: "Yes."
AOC:  "Who else knows the President did this?"
Cohen: "Allen Weisselberg, Ron Lieberman and Matthew Calamari." (Trump Org Execs)
AOC: "Do you think we need to review (Trump's) financial statements and his tax returns in order to compare them?"
Cohen: "Yes"

Congresswoman Debbie Wasserman Schultz (D-FL): "In your opinion and experience, would (Trump) have the potential to cooperate or collude with a foreign presidency at all costs?"
Cohen: Yes"

Congressman Jim Cooper (D-TN): "What was the breaking point at which you decided to start telling the truth?"
Cohen: "Hellsinki, Charlottesville ... watching the daily destruction of our civility to one another."

Congressman James Comer (R-KY): "You called Donald Trump a cheat in your opening testimony.  What would you call yourself?"
Cohen: A fool.

Congressman Raja Krishnamoorthi (D-IL): "Is there any other wrong doing or illegal act that you are aware of regarding Donald Trump that we have yet to discuss today??

Cohen: "Yes, and again those are a part of the investigation that is currently being looked at by the Southern District of New York."

Cohen noted that he is in "constant contact" with the Southern District office and that he has spoken with special counsel Robert Mueller's office 7 times. 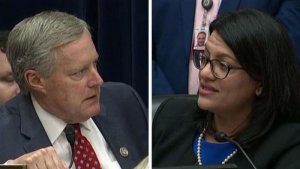 Congresspersons Mark Meadows (R-NC) and Rashida Tlaib (D-MI) had a heated exchange about racism related to Meadows' "prop" guest at the hearing, a black Trump admin office and supporter

The Southern District of New York is, apart from Congress, investigating the Trump Organization on a number of issues, including whether any executives, which include Ivanka and Donald Trump, Jr., violated campaign finance laws.

Michael Cohen's testimony today, before a closed-door session of the House Intelligence Committee, was expected to cover Trump Tower Moscow, Roger Stone/Wikileaks, and any White House role in Cohen's false statements to Congress.

Upon the close of the hearing, Committee Chairman Adam Schiff (D-WA) said the Committee "also covered a number of items and issues important to us that were not the subject of yesterday's hearing."

Schiff noted that they would be submitting additional document requests and that Michael Cohen would be returning for additional testimony March 6th.

Related
DemDaily: Your Guide to the Mueller Investigation 12/20/18