Massachusetts Congressman Seth Moulton and California Congressman Eric Swalwell are the two latest entries into the Democratic primary for the 2020 presidential race, and among the youngest of an ambitious field of now 18 White House contenders.

Both have built their reputations on beating the odds as challengers who unseated long-term incumbents to enter Congress, and have since distinguished themselves in the House of Representatives.

The 40-year-old Marine Corps veteran is expected to make national security and veterans' issues his priority, along with the economy, healthcare, climate change and cybersecurity. 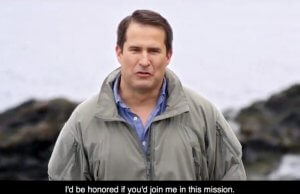 Seth Moulton: "Join me in this mission" (click/watch)

Background
A native of Salem, Massachusetts, Moulton is the oldest of three siblings born to Wilbur Moulton, Jr, a real estate attorney and Lynn Alice (Meader), a secretary.

After graduating from Harvard University in 2001 with a bachelor's degree in physics, Moulton joined the Marine Corps, serving four tours in Iraq. He was awarded the Navy and Marine Corps Commendation Medal for valor and the Bronze Star Medal for his actions in battle.

He went on to earn his master's degrees in business and public policy in a dual program at Harvard Business School and the Harvard Kennedy School in 2011, and served as director of a transportation firm for a year and as co-founder of a healthcare firm before entering politics.

In his first run for Congress, Moulton defeated nine-term incumbent John Tierney in the Democratic primary with 50.8% of the vote, and won the general election for Massachusetts's 6th congressional district by 14%.  He was uncontested in 2016, and in 2018 won reelection with 65.2% of the vote.

In 2018, he founded the Serve America PAC focused on recruiting veterans and "service-driven leaders" to run for office. 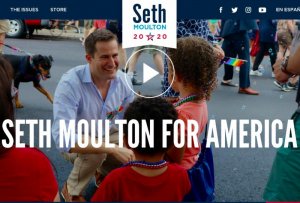 Although a self-described "progressive Democrat," Moulton is a member of the New Democrat Coalition, a congressional caucus made up of Democrats who support a moderate, pro-growth and fiscally responsible agenda.

He increased his national profile last November as one of 16 Democrats who opposed the election of Nancy Pelosi as House Speaker, calling for a "new generation of leadership" -- although he eventually voted in her favor.

Moulton serves on the House Armed Services Committee and the Budget Committee.

He is married to Liz Boardman, a partner at an executive search firm. They have a six-month old daughter.

Swalwell stated that combating gun violence will be a major focus of his candidacy, along with education and healthcare. 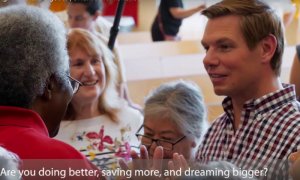 Background
Swalwell, 38, was born in Sac City, Iowa, the oldest of four sons of Vicky Joe Swalwell and Eric Nelson Swalwell, who served as police chief in Algona, Iowa.  His family later moved to Dublin, California.

He interned for Congresswoman Ellen Tauscher, worked as an Alameda County Deputy District Attorney and was elected to the Dublin City Council for one term before running for Congress in 2012.

From the outset, Swalwell drew national attention by defeating 40-year incumbent Democrat Pete Stark, 52.1% to 47.9% for the 15th congressional district seat. In California, the "top-two" primary vote-getters advance to the general election, regardless of party.

In the House, Swalwell co-founded the bipartisan United Solutions Caucus, established the Future Forum, a group of young House Democrats focused on the concerns of millennials, and launched the bipartisan Sharing Economy Caucus with Republican Congressman Darrell Issa (CA). 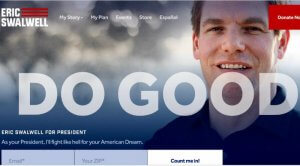 He is also a visible member of the Committee on the Judiciary, which he has used as a public platform to criticize the President and to call attention to the investigations into Trump and his associates.

His leadership positions include Co-Chair of the Steering & Policy Committee and membership on the Democratic Policy & Communications Committee (DPCC).

Known for his creative use of social media, Swalwell is also a frequent face on network television.

Swallwell is married to Brittany Ann Watts, a hotel sales director, and they have a two-year old son and a five-month old baby girl.

The Next (and last?) Contender
Former Vice President Joe Biden is expected to announce his candidacy this Wednesday. Last week, former Virginia Governor Terry McAuliffe took his name out of the running.

December 3, 2020 The outcome of the two US Senate runoffs in Georgia will decide not only control of the US Senate, but, likely, the future of D.C. Statehood. The battle over control of the...