Before we reach the 2020 general elections, many incumbent lawmakers must first make it through challenges to their standing as the party's nominee in primary elections.

Although not always publicized, at least 70% of elected officials will face some form of primary opponent, regardless of viability.

The Primary Challenge
Most challenges to incumbent office holders are driven by differences in ideology and are strongly discouraged by Party leaders wishing to avoid inter-party conflicts that threaten the safety of a secured seat. Equally as important, primaries consume valuable resources and often weaken the incumbent in negative battles in advance of the general election. 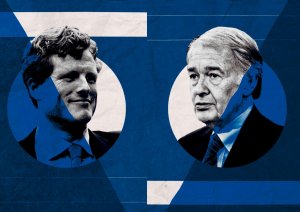 They are also statistically difficult, with post-World War II renomination rate for US Senate incumbents at 96%.

Massachusetts US Senate Race
None of these factors have deterred Congressman Joseph P. Kennedy, III, who announced on Saturday that he would be challenging fellow Democrat and two-term Senate incumbent Edward Markey in the Massachusetts primary next September.

In what will likely be the most high profile challenge on the Democratic side, and one of the most expensive, it appears to be a race defined by ambition - and timing.

Both Kennedy and Markey are well-respected in Congress, with solid progressive credentials rooted in deeply blue state Massachusetts.

On the surface, the only distinguishable difference between the two, whose roots go back decades, is age.

Kennedy, 38, was elected to his House seat in 2012 after serving as an Assistant District Attorney in Barnstable and Middlesex Counties.

Kennedy's hails from one of history's most famous dynasties, and the Bay state's most celebrated family, one that still strikes an immediate longing for the days of "Camelot" when his great uncle, John F. Kennedy, was President, and his grandfather, former Senator and US Attorney General Robert F. Kennedy, were in the White House.

He is also a grand-nephew of longtime "Lion of the Senate" from Massachusetts, Ted Kennedy, and a great-grandson of Joseph Patrick Kennedy, former U.S. Ambassador to the United Kingdom. On his maternal side, his great-grandmother was Rose Kennedy, the daughter of John F. Fitzgerald, a member of the US House and Mayor of Boston.

Know as a prolific fundraiser, Kennedy has been praised for his work on mental health issues and LGBTQ rights. 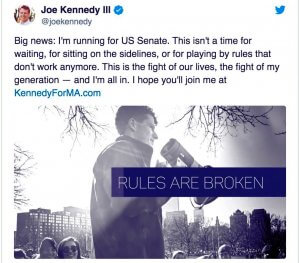 Markey, 73, was first elected to the US Senate in a 2013 special election to fill John Kerry's seat after Barack Obama nominated him for United States Secretary of State.

In 2014, Markey was elected to a full term in the senate with 61.9% of the vote. He had previously served in the US House since 1976 and in the Massachusetts House of Representative for two terms prior to running for Congress.

Opponents of Kennedy's decision to enter the race argue that he could be taking out one of the Senate's most progressive and respected Senators for the sake of ambition, one that will drain state and national dollars that could be going toward defeating Trump and other key races.

A deeper dive, however, reveals some strategy to Kennedy's timing.

Why Now?
If Massachusetts Senator Elizabeth Warren is on the winning 2020 presidential ticket, it means her seat will become open for a special election, with now a host of new potential contenders waiting in the wings. Challenging Markey now gives Kennedy an advantage he might otherwise not have in a larger, much younger and potentially competitive field for Warren's seat.

All nine of Massachusetts' congressional members are Democrats, and four are 45 or younger. In addition to Kennedy, the equally ambitious Seth Moulton, who dropped out of the presidential contest last month, is 40, and Lori Trahan, elected in 2018 to fill the open seat vacated by Niki Tsongas, is 45.  Ayanna Pressley, who unseated fellow progressive and ten-term incumbent Mike Capuano, is 45, and is already a rising star as one of the House freshman "squad."

Kennedy's pitch underscores the generational divide, noting, "Now is not the time for waiting, sitting on the sidelines or playing by old rules." It does not, however, ensure the support of his younger colleagues.  One of Pressley's fellow squad members, the nationally-popular Alexandria Ocasio-Cortez, has already endorsed Markey. 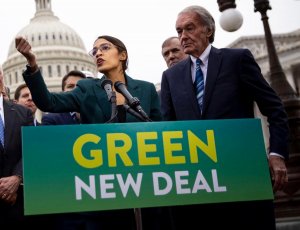 Markey, whose voting record is more liberal than Kennedy's, has been at the forefront of fighting, along with "AOC," for the Green New Deal. He also boasts four decades of progressive leadership on issues key to the left like healthcare, the opioid crisis, and net neutrality.

His long record has earned him the endorsement of over 100 of the state's lawmakers, and five of the state's US House delegation, including Richard Neal, Jim McGovern, Stephen Lynch, Bill Keating, and Lori Trahan. Moulton, Pressley and Katherine Clark have yet to endorse either candidate.

Markey also has the endorsement of fellow Massachusetts Senator Elizabeth Warren, who has been careful to note her "full support" of Markey's reelection came in February, prior to Kennedy's announcement.

Polling
The polling, however, says it all.
A September 3-5, 2019  Suffolk University/Boston Globe poll (MOE: +/- 4.4%)
, showed Kennedy leading Markey 35% to 26% among likely Democratic voters in a five-way race. If the race were narrowed to a head-to-head matchup, Kennedy's lead would grow even more, expanding to 14 points, with Kennedy leading Markey among every age group and across wide geographic swaths of the state.

When voters were asked how they react to the Kennedy name, 64% responded positively.

January 25, 2018 Technology plays a critical role in politics, and now in ways we least expected.  It is not enough that your campaign or operation is technically sophisticated, it must also be...