In December of 2015, Otto Warmbier, a 21-year old University of Virginia student from Cincinnati, Ohio, was traveling in China for a study abroad program when he decided to take a guided tour of North Korea.

While there, he allegedly attempted to steal a propaganda poster from his hotel, for which he was arrested and imprisoned.

In March, 2016, Warmbier was convicted of "subversion" against North Korea and sentenced to 15 years imprisonment with hard labor. 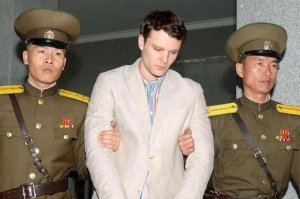 Harming or stealing an item with the name or image of a North Korean leader is considered a serious crime by the North Korean government, ruled since 1948, after the country's founding, by the Kim Regime.

Shortly after his sentencing, Warmbier suffered a severe neurological injury. According to North Korean authorities, who did not disclose his condition until June of 2017, he had fallen into a coma as a result of botulism and a sleeping pill.

Later that month the US government secured the release of Warmbier, still in a comatose state after 17 months in captivity. He never regained consciousness and died on June 19, 2017, six days after his return to the United States, and after his parents requested his feeding tube be removed.

Physicians found no evidence of botulism, nor did they find evidence of torture, and were unable to confirm the cause of the brain damage.

In a speech to the United Nations General Assembly on September 19, 2017, President Trump lambasted North Korea as a rogue state and a week later tweeted that Warmbier was "tortured beyond belief" by North Korea. 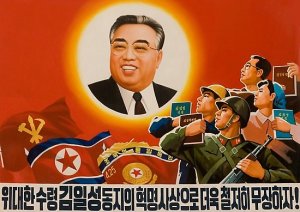 In November, 2017, at the encouragement of Warmbier's family, President Trump announced that the US Department of State was relisting North Korea as a state sponsor of terrorism.

In April, 2018 the Warmbiers sued the North Korean government in the United States federal district court in Washington, DC for the death of their son.

In June, 2018, President Trump said that Warmbier's death galvanized his determination to deal with North Korea, and he "did not die in vain."  Warmbier's parents praised President Trump and stated that they hoped something positive would come from the upcoming North Korea-United States summit.

Trump emerged from the Sinagapore treaty touting his "close bond" with Kim, ignoring warnings from US intelligence that North Korea remains a serious threat. 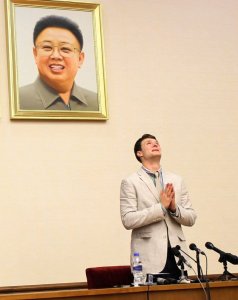 Otto Warmbier admits to "severe crime" and pleads for his life Feb. 29, 2016 in Pyongyang, North Korea

Despite ongoing reports, including one from The UN's International Atomic Energy Agency that North Korea could be enriching uranium and expanding its nuclear capabilities, Trump continued to express faith in Kim, boasting "we fell in love and he writes me letters."

In December, 2018, the US federal district court found North Korea liable for the torture and death of Otto Warmbier and ordered the country to pay his parents $501m in damages.

In  January, 2019 National Intelligence Director Dan Coats testified before Congress that North Korea "is unlikely to completely give up its nuclear weapons and production capabilities because its leaders ultimately view nuclear weapons as critical to regime survival."

Trump chastised Coats and other intelligence officials, assuring his twitter followers that all is well with North Korea.

At the close of the summit Trump was asked about his discussions with Kim regarding the Otto Warmbier case. In an apparent attempt to still appease the North Korean leader, Trump said Kim "felt very badly" about Warmbier's death.

Trump insisted, "I don't believe he would have allowed that to happen. He tells me that he didn't know about it, and I will take him at his word."

In doing so, our US President adds Kim Jong Un to the list of other world class human rights abusers whom he has publicly vouched for over his own country's intelligence agencies -- including Russian President Vladamir Putin, Saudi Crown Prince Mohammed bin Salman, Phillipines President Rodrigo Duterte, and Egyptian President Abdel Fattah el-Sisi -- to name a few.

R.I.P. Otto Warmbier.  Your fellow Americans will always remember you.