The United States House Select Committee on the January 6 Attack
met for the first time yesterday, beginning with the explosive testimony of four law enforcement officers who were at the scene of the insurgent/deadly attack on the Capitol just over six months ago.

The officers provided first-hand reports of the January 6th violent breach of the US Capitol in which rioters, at the encouragement of former President Donald Trump, attempted to stop the congressional certification of the Electoral College vote electing Joe Biden as our 46th President. 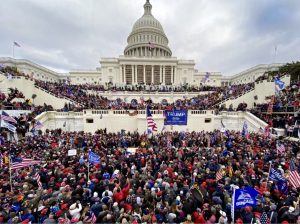 House Speaker Nancy Pelosi announced the designation of the Committee after formation of an independent Commission, which was approved by a bipartisan vote of 252-175 in the House on May 19th, was blocked by a filibuster in the US Senate.

Her eighth appointment was Congresswoman Liz Cheney (WY), who was one of 10 Republicans who voted to impeach former President Trump in January over the insurrection.

Minority Leader Kevin McCarthy (R-CA) nominated five members but withdrew all after Pelosi rejected Jim Jordan (OH) and Jim Banks (R-IN), both outspoken Trump loyalists who voted against certification of the presidential election results, and against the original commission.

Jordan and House Minority Leader Kevin McCarthy, who have admitted to speaking to Trump during the insurrection, may be called as material witnesses.

Pelosi subsequently appointed Republican Congressman Adam Kinzinger (R-IL), who voted in favor of the Commission, and the Committee is considering retaining a former GOP Congressman as an advisor.

Hearing Highlights
The four officers' emotional testimony was accompanied by horrific images from police body cameras played from the day as they described the physical and psychological injuries sustained during the attack.

US Capitol Police Sergeant Aquilino Gonell
Gonell, an Army combat veteran who served in Iraq, described the scene on the Capitol's West Front, where officers were outnumbered by thousands of people wielding bats, flagpoles and other items used to pummel the police.

That day, he said, "I heard officers screaming in agony and pain, just an arms length from me. I could feel myself losing oxygen and recall thinking to myself, this is how I'm going to die, defending this entrance."

When Congresswoman Cheney (R-WY) asked Gonell about Trump calling the group at the Capitol a "loving crowd," he retorted that it was "pathetic" and that he was "still recovering from those 'hugs and kisses' that day." 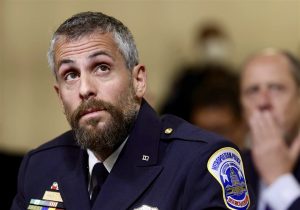 Washington, DC Metropolitan Police Officer Michael Fanone
Fanone, a two-decade MPD veteran who has spent most of his career investigating narcotics traffickers and violent crime, called the hand-to-hand combat between police and rioters "nothing short of brutal."

"I was grabbed, beaten, Tased, all while being called a traitor to my country," while hearing chants of 'kill him with his own gun.'" Fanone told the panel he was knocked unconscious during the Capitol assault and suffered a mild heart attack and brain injury.

Of lawmakers who have downplayed the violence that day, Fanone said, "I feel like I went to hell and back to protect them and the people in this room...The indifference shown to my colleagues is disgraceful!."

Fanone later reported that, while testifying, a message was left on his voicemail by an unidentified caller filled with racist, homophobic slurs, and foul language, ending with "I wish they would've killed all you scumbags. They stole the election from Trump and you know that."

Washington, DC Metropolitan Police Officer Daniel Hodges
Hodges, a member of Civil Disturbance Unit 42, described in chilling detail how he and other officers valiantly fought to defend "the line" both outside and inside the Capitol, while sustaining repeated injuries. 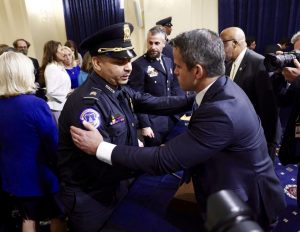 "The terrorists alternated between attempting to break our defenses, and shouting at or attempting to convert us...One man shouting, 'Are you my brother?' Another takes a different tack, shouting, 'You will die on your knees.'"

"Another shouted, 'Do not attack us. We're not Black Lives Matter.'...A man in a QAnon hoodie exclaimed, 'This is the time to choose which side of history to be on.'

Hodges described being pinned against a metal doorframe by the "terrorists," and being beaten repeatedly in the head and face.

When asked by Congressman Kinzinger about those who say "It's time to move on" from the incident, Hodges said, "There can be no moving on without accountability. There can be no healing until we make sure that this can't happen again."

US Capitol Police Private First Class Harry Dunn
Dunn, a Black officer who has been with the department for more than 14 years, described one of several encounters with the rioters while trying to defend the Capitol. 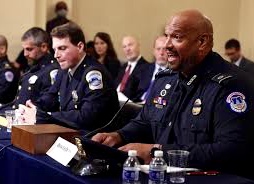 "More and more insurrectionists were pouring into the area by the Speaker's Lobby near the Rotunda, some wearing MAGA hats and shirts...saying 'President Trump invited us here. We're here to stop the steal...Nobody voted for Joe Biden.' After volunteering that he voted for Joe Biden, Dunn was met with a torrent of racial epithets, with the group screaming, 'Boo, fucking n*****.' "No one," said Dunn, "had ever, ever called me (that) while wearing the uniform of a Capitol Police officer."

In asking the panel seek out the truth, Dunn used the analogy, "If a hitman is hired and he kills somebody ...not only does the hitman go to jail, but the person who hired them does. There was an attack carried out on January 6th, and a hitman sent them. I want you to get to the bottom of that."

Next Steps
While the next hearing has yet to be scheduled, Committee Chairman Bennie Thompson has said he is prepared to hold hearings during Congress' seven weeks summer recess, which begins in August.

Thompson said he has "no reluctance whatsoever" in using his subpoena power to "follow the facts," and did not rule out subpoenas for Trump, other senior White House officials and members of Congress.

Related: DemDaily: The Capitol Attack: Aftermath and Accountability. The Update 7/20/21

October 2, 2020 Voters will cast their ballots for 435 congressional races in one month, and as part two of our House Races and Ratings, to follow is a rundown of the most vulnerable Democrats...