Last week, for the first time, many Americans learned of the 1921 Tulsa Race Massacre, when an estimated 300 black men, women, and children were killed and the entire district of Greenwood, Oklahoma was burned to the ground. 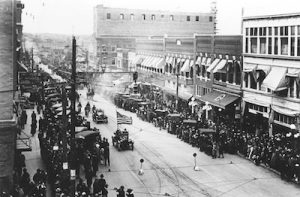 Greenwood District in the early 1900s was the most prosperous black urban community in the US, known as Black Wall Street

For much of the last 100 years, the horrific incident could not be found in the history books, which were written mostly by white men. Until recently, It was buried along with the mass graves of the Black citizens who were murdered that day.

Tulsa was also a highly segregated city, with most of the city's 10,000 Black residents living in a neighborhood called Greenwood. The "District" was founded and developed by African Americans starting in 1906 on what had formerly been Indian Territory.

Greenwood flourished with the opening of clothing shops, theaters and businesses, and the thriving district and surrounding residential area became known as "Black Wall Street."

On May 30, 1921, a young Black teenager named Dick Rowland entered an elevator at the Drexel Building, an office building on South Main Street in Tulsa. At some point after that, the young white elevator operator, Sarah Page, screamed and Rowland fled the scene, but was arrested the next morning. 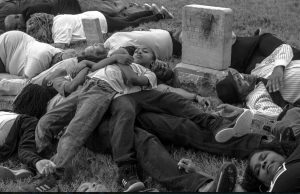 By that time, rumors of what supposedly happened on that elevator had circulated through the city's white community. An inflammatory front-page story in the Tulsa Tribune that afternoon reported that police had arrested Rowland for sexually assaulting Page.

As evening fell, an angry white mob was gathering outside the courthouse, demanding the sheriff hand over Rowland. Sheriff Willard McCullough refused, and his men barricaded the top floor to protect Rowland.

Around 9:00pm, a group of about 25 armed Black men, including many World War I veterans, went to the courthouse to offer help guarding Rowland. After the sheriff turned them away, some of the white mob tried unsuccessfully to break into the National Guard armory nearby.

As rumors of a possible lynching spread, a group of around 75 armed Black men returned to the courthouse shortly after 10:00pm, where they were met by an estimated 1,500 white men, some bearing weapons. 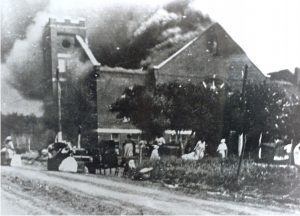 Mt. Zion Baptist Church was among the buildings burnt to the ground by white mobs (AP)

The Burning of Greenwood
After shots were fired and chaos broke out, the outnumbered group of Black men retreated to Greenwood.

Over the next several hours, groups of white Tulsans, some of whom were deputized and given weapons by city officials, committed numerous acts of violence against Black people, including shooting an unarmed man in a movie theater.

The false belief that a large-scale insurrection among Black Tulsans was underway, including reinforcements from nearby towns and cities with large African American populations, fueled the growing hysteria.

As dawn broke on June 1st, thousands of white citizens poured into the Greenwood District, looting and burning homes and businesses over an area of 35 city blocks. Firefighters who arrived to help put out fires later testified that rioters had threatened them with guns and forced them to leave. 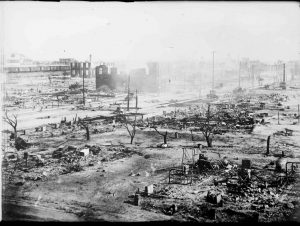 Greenwood after the burning (Red Cross)

Governor J. B. A. Robertson declared martial law shortly before noon, but by the time the National Guard arrived, the riot had effectively ended. Though guardsmen helped put out fires, they also imprisoned many Black Tulsans, and by June 2nd some 6,000 people were under armed guard at the local fairgrounds - some for up to eight days.

Estimates of the death toll were originally recorded as 36, along with more than 800 injured. The true number of deaths is now believed to be upwards of 300, with long-told stories of bodies stacked like cordwood, tossed into pits or dumped into the Arkansas River.

According to a later Red Cross estimate, some 1,256 houses were burned and another 215 were looted. Virtually every other structure in the Greenwood District, including churches, schools, businesses, and even a hospital and library, were destroyed or damaged by fire. 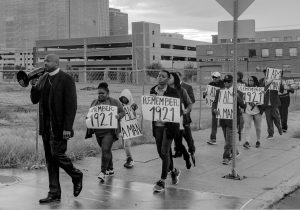 In the hours after the Tulsa Race Massacre, all charges against Dick Rowland were dropped. The police concluded that Rowland had most likely stumbled into Page, or stepped on her foot. Kept safely under guard during the riot, Rowland left Tulsa the next morning and reportedly never returned.

Then history buried the story along with the dead. The Tulsa Tribune removed the front-page story of May 31st that sparked the chaos from its bound volumes, and scholars later discovered that police and state militia archives about the riot were missing as well.

It was not until 1996, 75 years after the massacre, that a bipartisan group in the state legislature authorized the formation of the Oklahoma Commission to Study the Tulsa Race Riot of 1921. 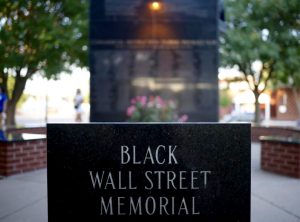 The Commission's final report, published in 2001, found the city had conspired with the mob of white citizens against Black citizens, stating, "These are not myths, not rumors, not speculations, not questioned. They are the historical record."

The Commission recommended a program of reparations to survivors and their descendants. The state also passed legislation to establish scholarships for the descendants of survivors, encourage the economic development of Greenwood, and develop a park in memory of the victims of the massacre in Tulsa, which was dedicated in 2010.

January 29, 2018 The Mayors of Puerto Rico were honored Thursday night before a packed room of national dignitaries at theLatino Leaders Network Tribute to Mayors in Washington, DC. Through six...