With today's New Hampshire primary contest, the presidential primary season is well underway, and the focus shifts to the state-by-state count of delegates that will lead to the election of our presidential nominee at the Democratic National Convention this summer.

A field of five top Democratic contenders came out of the Iowa Caucuses and, along with the separate, media-driven candidacy of Michael Bloomberg gaining traction, it is becoming increasingly more likely that no one candidate will go into the convention with enough delegates to capture the nomination outright. Under that scenario, Democrats would be forced into a contested, or brokered convention. 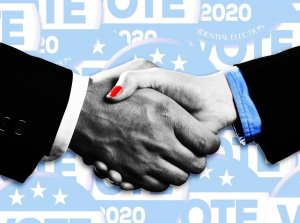 Counting Delegates
Over 4,500 delegates will attend the July 13-16, 2020 convention in Milwaukee, Wisconsin, prepared to cast their vote for the Democratic nominee who will take on Donald Trump in November.
How It Works
The Democratic National Committee (DNC) allocates the number of delegates for each state based on the state's electoral votes, the average of the vote for the Democratic candidates in the two most recent presidential elections, and the timing of the state primary or caucus.

National convention delegates are then awarded to presidential candidates based on the percentage of the vote they win in a state primary or caucus. A candidate is only eligible to receive a share of the pledged delegates at stake if they win at least 15% of the vote.

Those Pledged Delegates, who cast the vote for the nomination at the convention, must express a presidential candidate preference as a condition of their election. 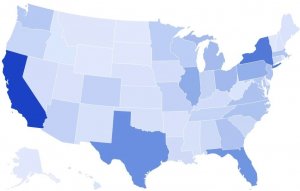 Pledged Delegates are those elected at the district level, or are pledged Party Leaders and Elected officials (PLEOs), At-Large or Alternates.

A second category, unpledged or Automatic Delegates, represent longer-term institutional members of the Party, including DNC members elected to four-year terms at the local level.

A brokered convention occurs when no single candidate has won enough [pledged/committed] delegates during the presidential primaries and caucuses to have a majority during the first vote at a party's nominating convention. 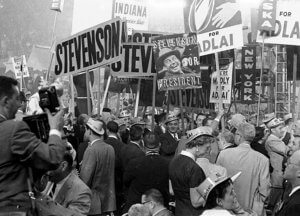 Adlai Stevenson was the beneficiary of a brokered convention in 1952

If a second ballot is required, then pledged delegates are freed from their commitment to vote for their first-ballot contender, and may cast their vote for a different candidate.

This is where the brokering comes in among coalitions and campaigns to put one candidate over the top. It is also where negotiations over the potential vice presidential nominee can play a major role.

While there are always discussions of a potentially brokered convention every presidential cycle -- a political junkie's dream -- historically they are very rare. 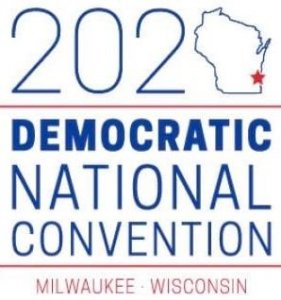 Ronald Reagan (R-CA) lost his bid to unseat incumbent President Gerald Ford at the 1976 Republican Convention. Because Ford won on the first ballot, it was not technically considered to have been "brokered."

For the Democrats, it was 1952, when Senator Estes Kefauver (TN) led the race after the primaries, but not the first floor ballot. On the third ballot Governor Adlai Stevenson (IL), with the backing of outgoing President Truman, emerged with the nomination. Stevenson went on to lose the general election to Dwight D. Eisenhower (R-KS).

2020 Convention
We still have 48 state primaries or caucuses, and contests in the five US territories and Democrats Abroad between now and the convention.

While the field can be expected to narrow after the March 3rd super Tuesday primaries, history has already been made in the numbers and diversity of contenders, as well as in the money spent by the players. We will see where history takes us.

February 15, 2018 17 people dead, 14 of them children. Yesterday’s tragic shooting at a Parkland, Florida High School was the 18th school shooting of 2018. The murders were among now...