Election Day is almost here and Americans are voting in record numbers. Over 95 million voters have already cast their ballots - nearly 70% of the total ballots cast in 2016.

Texas, North Carolina, Georgia, Florida, and Nevada have reached more than 90% of 2016's turnout, with Texas at more than 100%. More than twice as many young voters have voted than at this point in 2016.

Although the results of the presidential election may not be official until all ballots are counted in the coming weeks, we are confident that the path to democracy and the 270 electoral votes needed to push Joe Biden over the top, will be evident election night.

Approximately eleven states make up the playing field, where Biden and Trump are within 6% of each other in polling.

While the President is playing defense in key battleground states, his Republican colleagues are doing the same in key Senate races, as they attempt to hold onto their 53-47 control of the upper chamber.

The GOP is defending 23 seats this year, compared with 12 for Democrats, who will need to flip a net three seats of roughly ten in play.

The NBC News/Wall Street Journal poll found that 48% of registered voters say they prefer Democrats to be in charge of Congress, compared to 43% for a Republican-controlled Congress.

Here is our overlay of polling in the presidential and senate battleground states, and when we can expect to know the results based on when the votes are processed and counted.

The Battlegrounds: Presidential and Senate 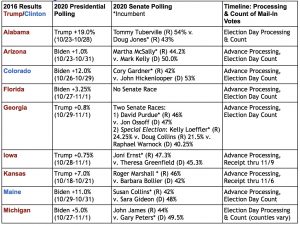 Polling figures are based on current polling averages over the last week and/or the most recent public polling conducted during the dates noted. 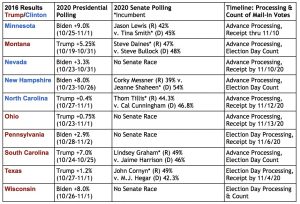 October 23, 2018 Two weeks out from the midterms, the surge in Republican enthusiasm following the Kavanaugh Supreme Court nomination battle has tempered some projections on the Democratic...