The confirmation hearings for the nomination of Amy Coney Barrett to be the next Supreme Court justice concluded today, wrapping up four days of testimony before the Senate Judiciary Committee. 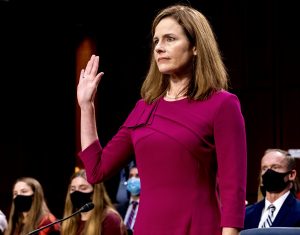 Barrett was nominated by President Trump just days after the September 18th death of Justice Ruth Bader Ginsburg, a "resolute champion of justice," who expressed her wish that her replacement not be made until after the election.

The confirmation would represent the most significant ideological shift in three decades, from Bader, a liberal icon, to Barrett, a conservative federal appellate judge, and would cement the conservative wing of the High Court at 6 to 3.

While, historically, the Committee usually takes a month for vetting and preparation, the GOP-controlled Senate has fast-tracked the process in an attempt to confirm Barrett before the November 3rd elections.

Highlights
Barrett, who has served on the Seventh Circuit Court of Appeals for three years, and previously as a Notre Dame law professor for 15, was composed and articulate throughout the hearings, successfully fending off Democrats' attempts to pin her down on major decisions. 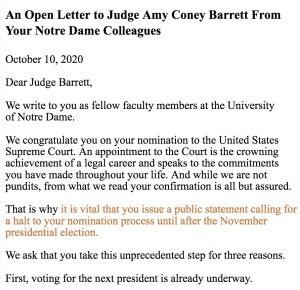 Despite repeated pressing by the committee's ranking Democrat, Senator Dianne Feinstein (CA) and other members of the committee, Barrett declined to say whether she agreed with the 1973 landmark abortion rights ruling in Roe v. Wade.

She likewise deflected questions on birth control, same-sex marriage,
the Second Amendment, her view of the role of precedent and the upcoming November 10th case before the court on the Affordable Care Act, which was at the center of much of the four-day hearing.

Barrett stated unequivocally that she has not discussed any cases with members of the executive branch, including the president, and has made no pomises.

She was willing to endorse the Supreme Court's 1954 decision desegregating public schools, Brown v. Board of Education, and the 1967 case in which the court struck down laws against interracial marriage, Loving v. Virginia.

Barrett also refused to commit to Senator Patrick Leahy, (D-VT), who said "(Trump's) counting on you to deliver him the election," that she would recuse herself from any election disputes arising from the November election.

Barrett pointed out that, under the Supreme Court's rules, recusal decisions are made in consultation with the full court, but she would consider the appearance of bias when making a decision.

"I certainly hope that all members of the committee have more confidence in my integrity than to think that I would allow myself to be used as a pawn to decide this election for the American people. So that would be on the question of actual bias."

Senator Chris Coons (D-DE) emphasized the significance of the confirmation by presenting a board listing of over 100 SCOTUS decisions where Justice Ginsberg cast the deciding vote.

Sheldon Whitehouse (D-RI) summarized the hypocrisy of Republican's rush to confirm Barrett days before the 2020 election after they blocked President Barack Obama's nominee in 2016. 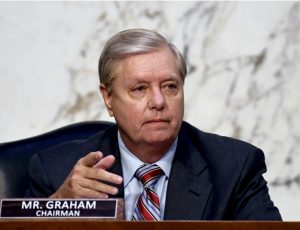 Graham: "This is the first time in American history we have nominated a woman who is unashamedly pro-life and embraces her faith without apology and she is going to the Court" (Kevin Dietsch/AP)

Saying there will not be two sets of rules for Democratic and Republican Senate majorities, Whitehouse said, "Don't think when you have established the rule of 'because we can,' that should the shoe be on the other foot, you will have any credibility to come to us and say: 'yeah, I know you can do that, but you shouldn't. Your credibility to make that argument at any time in the future will die in this room and on that Senate floor if you continue."

Elections, after all, have consequences.

Next Steps
Senate Judiciary Committee Chair Lindsey Graham (R-SC) has said Barrett's nomination will be reported out of the committee on October 22nd, and Senate Majority Leader Mitch McConnell (R-KY) has stated he expects to bring the nomination for a vote before the full Senate the next day, October 23rd.

Although open discussion will take place on the floor, Senate rules require just a simple majority of 51 to end debate on Supreme Court nominations, which means the actual vote may take place as early as Monday, October 26th. If there is a tie, the Vice President who also presides over the Senate, casts the deciding vote.

April 24, 2018 Earth Day has taken on a more urgent meaning for the environment as the protections for our natural resources, communities and, on a very real scale, our climate, have experienced...