Perhaps the most critical battlefield for Democrats in the November 5, 2019 elections -- now just one week away -- is for control of the state legislature in Virginia.  The outcome will ultimately shape future congressional and state legislative district boundaries and the direction of the Commonwealth for the next decade.

Virginia is one of four states with legislative elections in 2019. Louisiana and Mississippi, also up, have solid Republican majorities in both chambers and in New Jersey, where Democrats control the State House and Senate, just the House is up this year.

In Virginia, 2021 redistricting and the new district maps will be decided by the Virginia General Assembly. 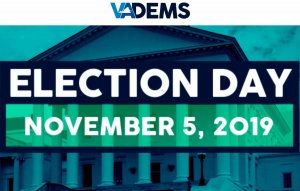 The Background and Battle
The Virginia elections fall against a longer, dramatic backdrop of court battles over the last eight years that started with the 2011 redistricting map.

2011: Drawn by the Virginia General Assembly, the plan packed African American voters into 12 majority-black legislative districts and into the third congressional district.

2013: The GOP-controlled General Assembly passed a strict voter ID law, along with early registration deadlines and the absence of in-person early voting -- making Virginia the second-hardest state in which to cast a vote.

2014: A panel of federal judges declared Virginia's congressional map unconstitutional due to racial gerrymandering. The Virginia GOP appealed the ruling to the Supreme Court.

2016: A federal court approved the new map and the Supreme Court rejected the Virginia GOP's appeal.

2018: A federal court ruled that 11 House of Delegates districts were racially gerrymandered and ordered a new map. The Virginia GOP appealed the case, and the Supreme Court agreed to hear it in 2019.

2019: A federal court approved the new House map drawn by a court-appointed expert and ordered it implemented before the November election.

On Election Day, all 40 State Senate and all 100 State House seats will be up for election.

Your vote will make a difference.