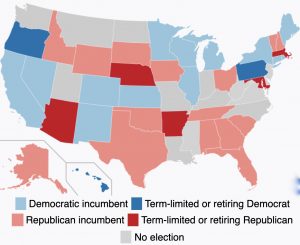 In the three 2019 gubernatorial contests, Democrats held onto Louisiana and flipped the governor's seat in Kentucky, while Republicans held on to the open Mississippi seat.

While the 2020 presidential election marked a number of historic shifts in voter performance, the status of the 11 gubernatorial elections up that year remained relatively unchanged. Just one state, Montana, flipped political control - to the GOP. 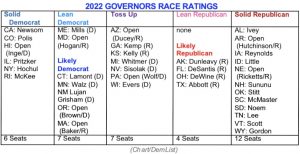 In one of the country's most politically divided states, which Biden won by 1.26%, term limits prevent two-term Democratic Governor Tom Wolf from running again. 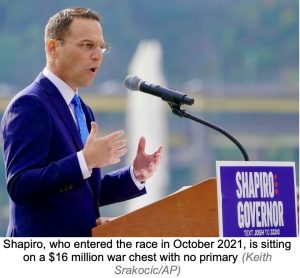 Attorney General Josh Shapiro, who has the endorsement of Wolf and the Pennsylvania Democratic Party, has cleared the primary field.

Shapiro was elected in 2016 to succeed Democratic incumbent Kathleen Kane, narrowly winning the general election against Republican State Senator John Rafferty Jr., 51.4% to 48.6%. He was reelected in 2020, fending off GOP challenger Heather Heidelbaugh 50.9% to 46.3%. 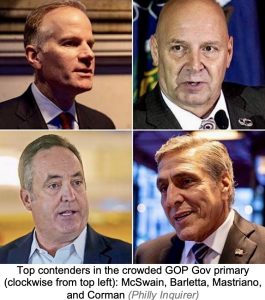 While former President Donald Trump has not endorsed in the race, he released a statement this week saying he will not be endorsing McSwain.

Trump called McSwain, who served as U.S. Attorney for Pennsylvania’s Eastern District under Trump, “a coward, who let our country down...who did nothing on the massive Election Fraud that took place in Philadelphia and throughout the commonwealth."

McSwain, who has the endorsement of the influential Commonwealth Partners PAC, had raised $2.25 million and had $1.7 million on hand. Mastriano had raised $1.4 million and had just $1.1 in the bank, followed by Barletta with over $674,000 in total contributions and over $356,000 on hand. That included close to $200,000 from his PAC, Change PA. The remaining candidates reported at or below $300,000 raised. 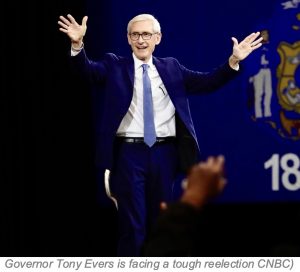 Evers previously served as the Wisconsin Superintendent of Public Instruction for ten years. As of January 31, 2022, Evers had raised $10.38 million with over $7.1 million cash on hand. 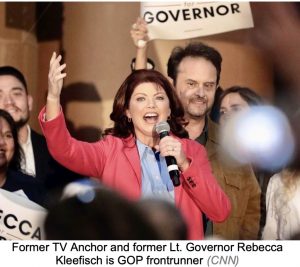 Nicholson, who lost the Republican Senate primary to Leah Vukmir in 2018, raised $3.62 million for his Senate bid.

A March 31-April 2, 2022 Remington Research Group survey of likely voters, sponsored by Fight For Wisconsin which supports Nicholson, showed Kleefisch at 42%, Nicholson at 29%, other candidates 4%, and 26% undecided (MOE +/-2.9%).

Also on the ballot: Incumbent Republican US Senator Ron Johnson is running for reelection and is likely to face Democratic frontrunner and former Evers' Lieutenant Governor Mandela Barnes. Other races: Lieutenant Governor, Attorney General, Secretary of State and Treasurer, US House (8), State Senate and State Assembly.

December 16, 2020 Former South Bend Mayor Pete Buttigieg and former Michigan Governor Jennifer Granholm are among the latest nominees for the Biden-Harris Cabinet. In the musical chairs of...

August 23, 2018 Tuesday’s primaries in Alaska and Wyoming put us past the halfway point in the primary season. THE AUGUST 21st PRIMARY RESULTS ALASKA Seats Up:  US House...