We are now 80 days out from the midterm elections!

DemList has posted the 2022 Election Calendar on our site, which includes all US Senate, House, and gubernatorial primaries, runoffs and special elections, as well as the Congressional legislative schedule.

You can also access our State Pages which provide a snapshot of state-by-state elected officials and party links.

Four of those involve special general elections to fill the remaining term of Members of Congress who vacated their seats early. Those candidates will serve through January 2023, the end of the 117th Congress, but are running separately in the regularly scheduled general election in November for a seat in the 118th Congress. 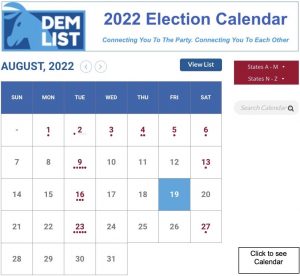