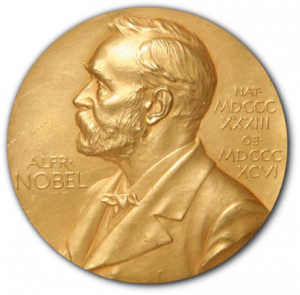 The Nobel Prizes were awarded this week, recognizing groundbreaking contributions by an individual or organization in the fields of Physics, Chemistry, Physiology or medicine, Economic science, Literature and Peace.

Widely regarded as the world's most prestigious awards available in these fields, the prizes go to ”those who, during the preceding year, have conferred the greatest benefit to humankind.”

Alfred Nobel was a Swedish chemist, engineer, and industrialist most famously known for the invention of dynamite. In his 1896 will, he bequeathed all of his remaining assets to be used to establish five prizes which became known as "Nobel Prizes."

Nobel Prizes were first awarded in 1901, and the Nobel Memorial Prize in Economic Sciences was added as the sixth prize, beginning in 1969.

Each Nobel "Laureate" receives a gold medal, a diploma and a monetary award. In 2021, that award is 10 million Swedish krona, or about $1.1 million, which is divided if there are multiple winners.

The Committee selects the winners from a pool of hundreds of nominees from qualified nominators, who themselves must be distinguished members of internationally recognized bodies, governments or courts, esteemed experts in their fields or past Nobel recipients.

The Committee does not disclose the nominees or those who nominated them until 50 years later, leaving people to self-report their submissions if they choose.

After the annual January 31st deadline, the Committee assesses each candidates’ work and prepares a short list of 20 to 30 nominees in each category for a final vote. A prize may not be shared among more than three individuals, although the Nobel Peace Prize can be awarded to organizations of more than three people.

The Nobel Prize in Physiology or Medicine was awarded jointly to David Julius, a professor of physiology at the University of California, San Francisco, and Ardem Patapoutian, a molecular biologist and neuroscientist at Scripps Research in La Jolla, California, “for their discoveries of receptors for temperature and touch.”

The pair made breakthrough discoveries that launched intense research activities that in turn led to a rapid increase in our understanding of how our nervous system senses heat, cold, and mechanical stimuli.

The Nobel Prize in Physics was awarded to three scientists whose work “laid the foundation of our knowledge of the Earth’s climate and how humanity influences it, as well as revolutionized the theory of disordered materials and random processes."

The Prize is awarded with one half jointly to Syukuro Manabe (Princeton University), Klaus Hasselmann (Max Planck Institute for Meteorology in Hamburg, Germany) “for the physical modelling of Earth’s climate, quantifying variability and reliably predicting global warming,” and the other half to Giorgio Parisi (Sapienza University of Rome) “for the discovery of the interplay of disorder and fluctuations in physical systems from atomic to planetary scales.”

The Nobel Prize for Chemistry was awarded to Benjamin List, a German chemist and Director at the Max Planck Institute for Coal Research in Mülheim an der Ruhr, and David W.C. MacMillan, a Scottish chemist and a professor at Princeton University, “for the development of asymmetric organocatalysis”.

They developed a precise new tool for molecular construction which has spurred advances in pharmaceutical research and lessened the impact of chemistry on the environment. Their work, while unseen by consumers, is an essential part in many leading industries and is crucial for research.

The Nobel Prize in Literature was awarded to Abdulrazak Gurnah for “his uncompromising and compassionate penetration of the effects of colonialism and the fate of the refugee in the gulf between cultures and continents.”

Gurnah, who grew up in Zanzibar, Tanzania, but migrated as a refugee to England in the 1960s, is the first African to win the award in almost two decades. He has published ten novels and a number of short stories. The theme of the refugee’s disruption runs throughout his work.

The Sveriges Riksbank established the Prize in Economic Sciences in Memory of Alfred Nobel, was established in 1968 and is awarded by the Royal Swedish Academy of Science according to the same principles as the other Nobel Prizes.

This year’s Laureates "have provided us with new insights about the labour market and shown what conclusions about cause and effect can be drawn from natural experiments. Their approach has spread to other fields and revolutionised empirical research."

One half is awarded to David Card (University of California, Berkeley) “for his empirical contributions to labour economics,” and the other half jointly to Joshua Angrist (MIT) and Guido Imbens (Stanford University) “for their methodological contributions to the analysis of causal relationships.”

Notable Women Laureates: Between 1901 and 2021 the Nobel Prize and prize in economic sciences have been awarded 58 times to women. That includes Pakistan native Malala Yousafzai, history's youngest Nobel recipient at age 17, who received the Peace Prize in 2014, and Polish-French physicist Marie Curie, who received the Nobel Prize for Physics in 1903, and the Prize for Chemistry in 1911.

As the champion of Nobel Prizes, the nomination and selection process for the Peace Prize, presented in Oslo, Norway each year,  is one of the world’s most scrutinized and secretive. 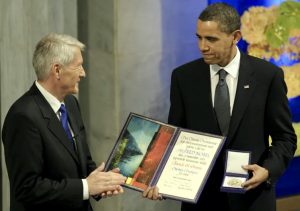 In 2009, Barack Obama became the fourth US President to receive the Nobel Peace Prize, after Theodore Roosevelt, Woodrow Wilson and Jimmy Carter (with Carter's honor happening after he left office). AP

"The Norwegian Nobel Committee is convinced that freedom of expression and freedom of information are crucial prerequisites for democracy and protect against war and conflict. The 2021 peace prize laureates are representative of all journalists who stand up for this ideal in a world in which democracy and freedom of the press face increasingly adverse conditions."

The 2021 Nobel Peace Prize was awarded to journalists Maria Ressa and Dmitry Muratov “for their efforts to safeguard freedom of expression, which is a precondition for democracy and lasting peace.”

Ressa, a Fulbright scholar, who was also named a Time magazine Person of the Year in 2018 for her crusading work against disinformation, "uses freedom of expression to expose abuse of power, use of violence and growing authoritarianism in her native country, the Philippines."

Muratov has for decades defended freedom of speech in Russia under increasingly challenging conditions.