Women are running for office at every level and the 2021 election, just over one week away, is no exception.

At the federal level, there are 24 female Senators (16 Democrats/8 Republicans) and 119 female members of the US House (8 Democrats/31 Republicans). 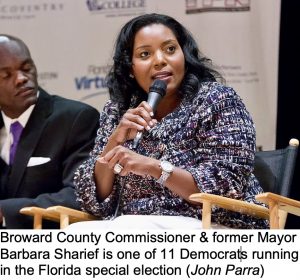 Florida 20th CD: In the contest to fill the seat of the late Alcee Hastings (D), who was first elected in 1992 and who passed away in April, the primary will take place November 2, 2021 and the general election January 11, 2022. 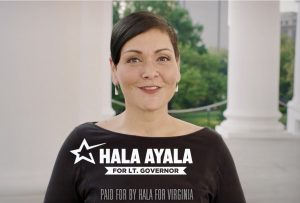 In Virginia and New Jersey, the only two gubernatorial races up this year, men are at the top of the ticket, but women are competing for the #2 slot.

In Virginia, where former Governor Terry McAuliffe (D) and Glenn Youngkin (R) are in a tight race for the Governor's mansion, two women are going head-to-head for Lt. Governor. The winner will make history as not only the first woman, but the first woman of color, in that role. 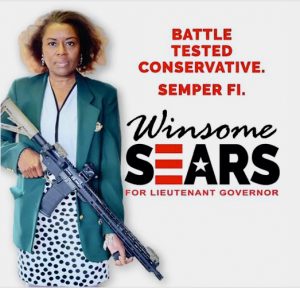 On the Republican ticket, Winsome Sears, who was selected at the May 8th GOP Convention, is a former US Marine, small businesswoman, and an "unapologetic" conservative.

The first Black Republican woman elected to the Virginia General Assembly in 2001, she left the State House to make an unsuccessful bid in 2004 for the 3rd Congressional District against Democratic Congressman Bobby Scott.

It has been 12 years since a Republican won a statewide office in Virginia and all eyes are on the Commonwealth as a gauge of the Biden agenda and the first major indication of what lies ahead in 2022. 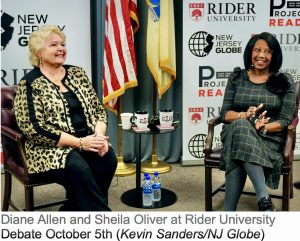 In the Garden State, where the Lt. Governor runs conjointly with the gubernatorial candidate, current Lt. Governor and former Speaker of the New Jersey General Assembly Sheila Oliver is on the ticket again with Murphy.

On the GOP ticket with Ciattarelli is Diane Allen, a journalist, nightly news anchor, and former New Jersey Senate Deputy Minority Leader. Allen also ran unsuccessfully in 2002 for the GOP US Senate nomination.

Only three of the country's 99 state legislative chambers are holding regularly scheduled elections in 2021: the Virginia House of Delegates, and both New Jersey's legislatures.

In the Old Dominion, where all 100 State House seats are up, Democrats hold a 55-45 majority, meaning Republicans will just have to flip six seats to take back the House, which they lost in 2019. 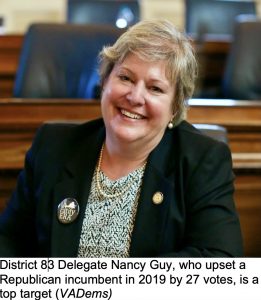 While both major parties are fielding a record number of female candidates, Democrats have crossed a historic threshold with women accounting for more than half of the party's House nominees -- 50 out of a total of 97. 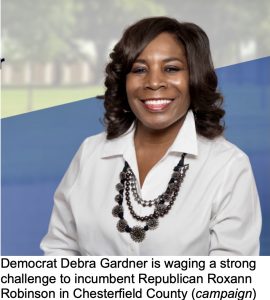 Democrats hold a supermajority in both the State Senate and House, which are both up next week. New Jersey currently ranks 25th among the 50 states for women’s representation in its state legislature, with women holding 30.8% of state legislative seats. At least 5 Asian women won primary contests. Should they win in the general election, they would become the first Asian women elected to the state legislature. 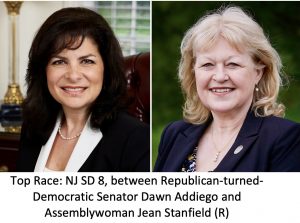 In the State Senate, Democrats hold a 25-14 majority, (with one vacancy in a formerly Republican seat). Of the 28 men and 11 women currently holding office, three are not seeking reelection.

In the New Jersey General Assembly, Democrats hold a 52-28 majority, with 54 men and 26 women currently holding office. Of the 80 Assembly members, 11 incumbents are not running for reelection. All told there were 61 women(39 Democrats/22 Republicans) who are running in the general election. 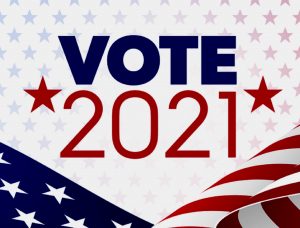