With the close of the November elections comes the launch of the 2020 presidential election cycle, and an anticipated roll out of candidate announcements in the coming months.

Although the general public may not have been tracking the activities of White House potentials prior to the midterm electons, aspiring presidential candidates have been actively campaigning, raising funds, and criss-crossing early presidential primary and caucus states in the "invisible primaries." 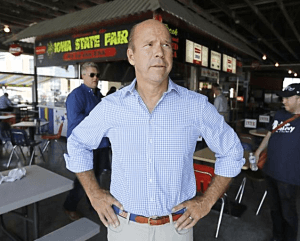 The Candidates
Over a dozen potential candidates have been on the trail for over a year, hoping to raise name recognition and support to distinguish themselves from the pack in the first critical primaries.

In Iowa's, home of the "first in the nation" caucuses, Congressman John Delaney (MD-6), who formally announced his presidential bid in July of 2017, leads the pack with 20 trips.

The release of the Federal Elections Commission's official presidential calendar is not expected before January, 2019, so to follow is DemLists' Initial Presidential Primary Calendar.

This is our best effort from cross-referencing 5-7 established public resources, including individual Secretary of State offices - all with varying information.

Dates are tentative, as a number of states and political parties are still finalizing decisions on their primary or caucus dates and/or are awaiting legal challenges. There are also a number of traditional caucus states that are switching to the primary system (more to come on that breakdown). 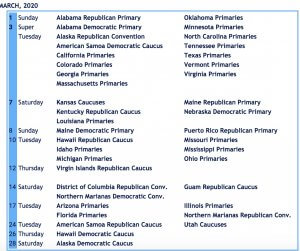 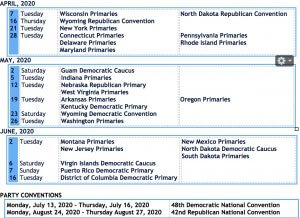 July 24, 2018 In the West Virginia US Senate race, Don Blakenship, who failed to win the May 8th Republican primary, is challenging the state’s “sore loser” law in an attempt to...

August 1, 2017 Sunday was the 52nd anniversary of Medicare and Medicaid, the two government-run, social insurance programs that provide health care to the most vulnerable of our citizens –...