All eyes were on Texas yesterday, which held the first-in-the-nation mid-term primary under President Trump, with the US Senate, Governor, statewide offices and all thirty-six US House races up for election.

The "red" southern state delivered a 52.6% to 43.4% victory for Donald Trump over Hillary Clinton in the 2016 presidential election, and a coveted 38 electoral votes - the second largest in the nation. 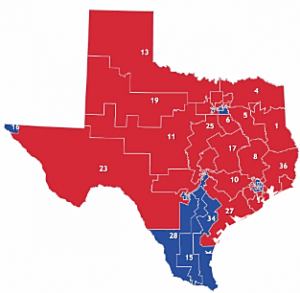 Under a turbulent White House, and with Democrats contests in all 36 congressional districts for the first time in 25 years, Dems looked to Tuesday's primary as an opportunity to start moving Texas back to its blue roots.

The result was mixed, but still leaves the door open for Democratic gains that could help flip the US House to Democratic control.

Voter Turnout
Voter turnout reached the highest in over a decade, with Democrats turning out for early voting in larger numbers, giving hope to a shifting landscape.

Although overall numbers for Dems rose significantly over 2010 and more than twice that of the 2014 mid-term elections, the GOP ultimately turned out over half-a-million more primary voters than Democrats.

All 11 Democratic seats are considered safe or ripe for re-election, including Texas 29, where Gene Green is retiring, and the Texas 16 seat being vacated by Beto O'Rourke.

That leaves three top competitive races, where Clinton won in 2016, and where Democrats will be facing run-offs on May 22nd to vie for the right to challenge three highly vulnerable Republican incumbents.