In the nation's first state primary of 2022, and Texas' first election using the state’s new Republican-drawn political map, the results are far from over, with a majority of statewide primaries going to a runoff on May 24th.

On Tuesday, March 1st, Lone Star Democrats and Republicans went to the polls to choose their candidates for seven statewide seats, including Governor and Lieutenant Governor, as well as each party's nominees for district-based congressional and legislative offices.

Additional elections included 15 seats on the State Board of Education, the Texas Supreme Court, the Texas Court of Criminal Appeals and the appellate courts. Municipal, local school board and ballot measures were also on the ballot in Texas' 254 counties. 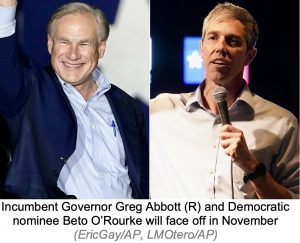 Lieutenant Governor: Incumbent Dan Patrick (R), who is seeking a third term, easily fended off five lesser-known primary opponents with 76.6% of the vote.

With 95% of votes reported, the Democratic nomination is expected to go to a May 24th runoff between 2018 Democratic nominee Mike Collier, who secured 41.5% and former State Representative Michelle Beckley with 30.2%. Former Vice Chair of the Texas Democratic Party Cara Brailey secured 28.2%.

Attorney General: Embattled incumbent Ken Paxton (R), under fire for a high-profile securities fraud indictment and an FBI investigation into claims of malfeasance in office, was unable to secure the necessary 50% to avoid a runoff. The Trump-endorsed Paxton, who garnered 42.7% of the primary vote, will face Texas Land Commissioner George P. Bush, who secured a distant 22.8%. Bush is the son of former Florida Governor Jeb Bush. Former Texas Supreme Court Judge Eva Guzman secured 17.5% and Congressman Louie Gohmert 17%. 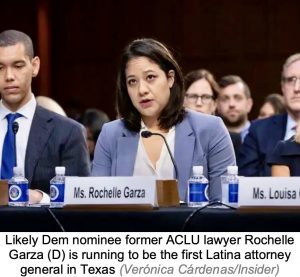 The Democratic nomination will also go to a runoff between Brownsville lawyer Rochelle Garza, who secured 43.6% of the vote, and either former Galveston Mayor Joe Jaworski (19.6%) or Dallas civil rights lawyer Lee Merritt (19.5%). With less than 1,400 votes separating Jaworski and Merritt, and 5% of the vote still uncounted, the race for the second spot has not been called.

Public Lands Commissioner: In the open seat being vacated by George P. Bush (R), State Senator Dawn Buckingham took the field of eight GOP primary contenders with 41.8%, but not enough to avoid a runoff with pastor and educator Tim Westley who secured 14.8% of the vote.

In the four-way Democratic primary, mental health counselor Sandragrace Martinez, with 32%, and rancher Jay Kleberg, with 25.8%, will go to a runoff. Jinny Suh and Michael Lange received 22% and 20.3% of the vote respectively.

Railroad Commissioner: One seat on the three-board commission is up, where incumbent Republican Wayne Christian will now face a runoff (47.3%) with Sarah Stogner (15%). Democratic party staffer Luke Warford was uncontested for the Democratic nomination. 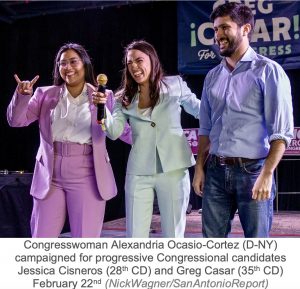 US HOUSE
28th Congressional District: In one of the highest-profile elections, conservative pro-life Democratic Congressman Henry Cuellar is a top GOP target. The nine-term representative is under scrutiny following a recent FBI raid of his home and campaign headquarters in Laredo in connection an investigation into several people with ties to the state-owned oil company of Azerbaijan.

In a runoff pitted as a battle between moderate and progressive Democrats, Cuellar will face attorney Jessica Cisneros who secured 46.8% to Cuellar's 48.5% in Tuesday's primary. Cisneros has the big name endorsements of Senators Elizabeth Warren and Bernie Sanders and Congresswoman Alexandria Ocasio-Cortez.

All seven Republicans in the GOP primary fell below the 50% threshold for victory, with Cassy Garcia (23.5%) and Sandra Whitten (18%) advancing to a runoff.

In the Third Congressional District, incumbent Van Taylor (R), one of 10 Republicans who voted to support the January 6th investigation, was heading to a runoff with Collin County Judge Keith Self (R), having secured 48.7% to Self's 26.7%.

On March 2nd, however, Taylor announced that he would be suspending his re-election campaign and instead be retiring at the end of the 117th Congress after admitting to an extramarital affair. This means Seif will now face Democratic nominee and real estate consultant Sandeep Srivastava, who won his primary with 62%. 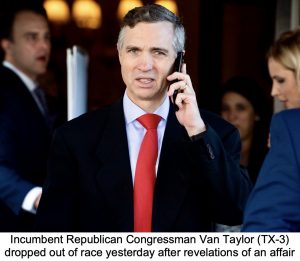 Gonzalez will face either attorney Ruben Ramirez (28.3%) or businesswoman Michelle Vallejo (20.1%), who advanced to a runoff.

Christian Collins, a political operative who had the backing of Senator Ted Cruz (R-TX) and Congresswoman Marjorie Taylor Greene (R-GA), came in second with 22.2%. Democrat nominee Chris Jones was uncontested.

In a win for progressives, former Austin City Councilmember Greg Casar won the 35th Congressional District Democratic primary with 61.2% of the vote. The open seat was previously held by incumbent Democrat Lloyd Doggett (D) who, after redistricting, is seeking re-election in the 37th District. In the Hispanic-majority district Casar is heavily favored in the general election against the winner of the Republican primary runoff between Dan McQueen and Michael Rodriguez.

The 30th Congressional District Democratic primary is heading to a runoff as well in the solidly blue district to replace retiring Congressman Eddie Bernice Johnson (D). State Representative Jasmine Crockett, who secured 48.5% of the vote and is endorsed by Johnson, faces a runoff against former Biden staffer Jane Hamilton who secured 17%. Crockett will face the winner of the Republican primary runoff between James Harris and James Rodgers.

No state Senate incumbents lost their seats Tuesday night. In the House, one sitting Democrat, Art Fierro, lost, and no incumbent Republicans were knocked out, though a few were forced into runoffs.

May 27, 2020 Among the most critical battles of 2020 are those being waged at the ground level in the state legislatures, where control of one or both chambers will determine which party controls...