On Friday Republicans finalized their proposed tax plan and, with votes expected by the House and Senate in the next two days, the halls of Congress are overflowing with protests over the bill's provisions.

The most significant overhaul of the US tax code since 1986, the much-debated bill would provide President Trump with his first legislative victory -- on the backs, some say, of the middle-class.

Although the final bill includes trillions in cuts, it would increase the deficit by at least $1.46 trillion over a decade, and provide significant permanent tax cuts for corporations and business owners, while providing only temporary individual, middle-class provisions that would expire in 2025.

Key provisions, as of this writing include:

3. Eliminates Personal Exemptions: Throws out the $4,050 personal exemption for individuals, their spouse and dependents, negating any tax relief they might get from other provisions in the bill.

4. Caps State and Local Tax Deduction: Currently unlimited for state and local property taxes plus income or sales taxes. Preserves the state and local tax deduction for those who itemize, but caps it at $10,000.

6. Creates Temporary Credit for Non-Child Dependents: Gives parents a $500 credit for each non-child dependent, such as a child 17 or older, an ailing elderly parent or an adult child with a disability.

7. Lowers Cap on Mortgage Interest Deduction: Reduces deduction for interest on a debt from a new mortgage on a first or second home, from $1 million to $750,000, and would eliminate the deduction for the interest on home equity loans (currently allowed up to $100,000). 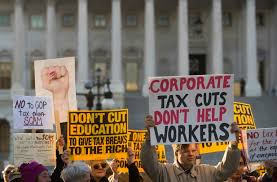 10. Exempts Majority from Estate Tax: Eliminates estate tax for most by doubling the threshold for exemption, currently at $5.49 million for individuals/$10.98 million for married.

11. Slows Inflation Adjustments in Tax Code: The bill would change to a slower measure of inflation, reducing the value of deductions, credits and exemptions and subject income to higher rates in future years.

12. Eliminates Health Insurance Mandate: Eliminates the Affordable Care Act's penalty for not buying insurance, which would purportedly help offset the cost of the bill by saving the federal government money spent on insurance subsidies and Medicaid.

Business and Corporations
1. Slashes Corporate Rate: The bill cuts the corporate rate from 35% to 21%, and would also repeal the alternative minimum tax on corporations.

2. Lowers Tax Burden on Pass-Through Businesses: Lowers tax by 20% on owners, partners and shareholders of S-corporations, LLCs and partnerships - who pay their business' tax share through their individual returns.

Service business do not qualify -- unless their income is less than $315,000 married/$157,500 single. If the owner also draws a salary from the business, it would be subject to ordinary income tax rates, disadvantaging business owners who actively work over those who are passive owners

3. Change Taxing of US Multinationals: US companies currently pay taxes on all their profits, regardless of where the income is earned, compared to foreign competitors with territorial tax systems, meaning they don't owe tax to their own governments on income they make offshore.

The GOP bill proposes switching to a similar territorial system and require companies to pay a one-time, low tax rate on their existing overseas profits -- 15.5% on cash assets and 8% on non-cash assets.

Status
The GOP count on "yes" votes in the Senate is 49-48. Republican Jeff Flake (AZ) is still undecided. Senator John McCain (R-AZ) and Senator Thad Cochran (R-MS), both in the hospital, are not expected to be present for the vote. Alabama's newly-elected Democratic Doug Jones will not have a voice, as Republicans are refusing to officially seat him until after interim-Alabama Senator Luther Strange (R) casts his vote.

Convention Central: Convention Primer! What and Who you Need to Know

For those just now focusing on this summer’s Democratic Convention, a primer!