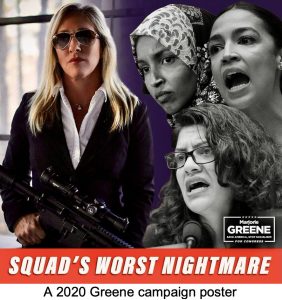 One of the more vilified and controversial members of Congress, of either party, is GOP Congresswoman Marjorie Taylor Greene from Georgia's 14th congressional district.

The first-term Congresswoman, who succeeded five-term GOP incumbent Tom Graves in 2020, was a lightning rod for controversy from the outset of her candidacy for her connections to the QAnon movement and her history of antisemitic, racist and Islamophobic comments.

A far-right conspiracy theorist, she is an ardent supporter of former President Donald Trump and his false election-fraud claims.

Among her public posts are those suggesting that the September 11 attack on the Pentagon was fake, that California wildfires had been started by a space laser controlled by a Democrat-connected Jewish family, and that the election of Rashida Tlaib and Ilhan Omar was part of “an Islamic invasion of our government.” 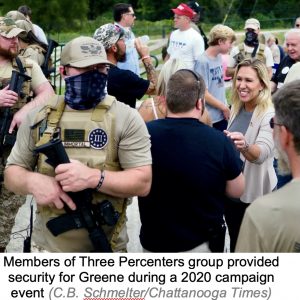 Before running for office she called for the execution of Democratic politicians and FBI agents she alleged were part of the "deep state" against Trump. She later claimed that the 2018 Parkland, Florida school shootings and the 2012 Sandy Hook Elementary School shootings were falsely staged by gun control advocates.

Upon election, Greene immediately self-catapulted to one of the most contentious new members of Congress. She voted against certification of the electoral college count and compared the January 6th attack by "innocent people" on the Capitol to the Declaration of Independence.

Greene has publicly supported violent right-wing extremist groups that participated in the Capitol insurrection, including the Oath Keepers and the Three Percenters. More recently, the Congresswoman equated the Democratic Party to Nazis and compared COVID-19 safety measures to the persecution of Jews during the Holocaust.

On February 4th, just a month after being sworn in, the US House of Representatives, including 11 Republicans, voted to remove Greene from all committee roles in response to her previous incendiary statements and endorsements of political violence.

The 14th Congressional District
Under the 2022 redistricting plan passed by the Republican-controlled state legislature on November 22nd, Georgia will retain all 14 US House seats, with a likely shift in the GOP's favor. 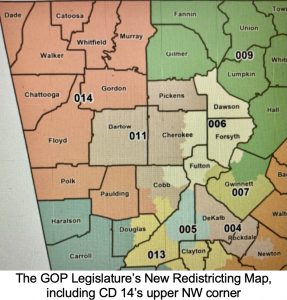 The new 14th District, however, was redrawn to include a chunk of Democratic voters in Cobb County, some of the most solidly Democratic, and most diverse, portions of the suburban county, adding an estimated 25,000 minority voters to the Congressional District.

The new map also excludes the heavily GOP counties of Pickens and Haralson, prompting ire from Congresswoman Greene, who bashed the new lines as a “fool’s errand that was led by power-obsessed state legislators.”

Ten of the twelve original Northwest counties remain, including the major cities of Rome, Calhoun and Dalton. Still predominantly white, rural, and working-class, the district has an estimated per capita income average of under $30,000, with only a third of its residents having graduated from high school.

The Democrats
Three Democrats are vying in the May 24th primary for the chance to take on Greene next November.

Rome City Commissioner Wendy Davis, who entered the race in June, is the only candidate with elected experience in the primary, having served since 2013 on the ballot in what is now roughly 8% of the new CD. 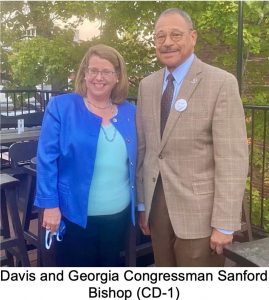 Days after Davis' entrance into the campaign, Greene sent out a fundraising email saying, "Democrats have recruited Democrat National Committee Super Delegate Wendy Davis to defeat me in 2022" and that Davis was "handpicked by the Hillary Clinton/Stacey Abrams wing of the Democrat party."

Davis, whose family goes back five generations in northwest Georgia, is also an elected member of the DNC and is on the national board of the Democratic Municipal Officials. She reported raising $250,000 for her first three months in the race, nearly 76% of which came from fellow Georgians.

On December 5th, former primary opponent and Paulding County Democrat Lateefah Conner dropped out of the race and endorsed Davis, saying "Wendy Davis has a track record of building a strong Democratic foundation in one of the hardest Congressional Districts in Georgia. From her work with the local Democratic parties to other progressive work, I stand by her."

In addition to the current support of Georgia Congressman Sanford Bishop, Davis' campaign said they are rolling out the endorsements of five State Senators and 15 State House members in the coming weeks. 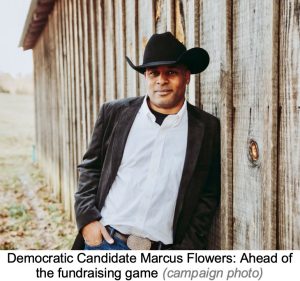 US Army veteran and defense compliance contractor Marcus Flowers, the first to jump into the race in February, has amassed a war chest, having raised over $3.3 million during the first nine months of this year and more than $1 million cash on hand as of September 30th.

Flowers effectively turned the early support of Vote Vets PAC and prominent veterans such as former US Senator Max Cleland and Congressman Eric Swalwell (D-CA) into a national fundraising campaign as the first and most visible opponent of Greene.

Online contributions soared after Flowers tweeted a fundraising appeal with a video of him getting kicked out of a Greene "America First" rally in May "because I was deemed a 'threat.'" Nearly 90% of his itemized contributions come from outside the state.

Although far ahead in the fundraising game, Flowers is still dealing with concerns regarding his long-term viability amid questions about his work history and legal allegations of domestic violence from his ex-wife, as reported by The New Republic last Summer. In addition, under the new redistricting plan, Flowers' home in Haralson County has been cut out of the 14th Congressional District, although that would not disqualify him from running. 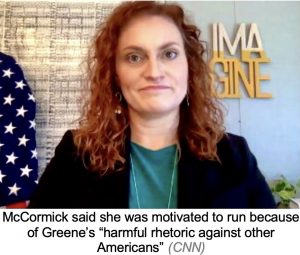 Holly McCormack, a native of Rossville and owner of a small insurance business in Chattanooga, entered the race in February. McCormick has also been adept in her use of social media to raise funds against Greene, bringing in just under $700,000 by the end of September, 11% of which was from Georgia.

The Republicans
While Congresswoman Greene's platform in Congress may have technically diminished, social media continues to be a venue for her loud voice and for fundraising from her base. Her suspension from Twitter in August for multiple violations related to disinformation and conspiracies only magnified donor enthusiasm.

She has raised $6.3 million toward her reelection, although just 8% from Georgia residents.

In the interim, the Democratic Congressional Campaign Committee (DCCC) continues to use Geene as a foil, starting with a $500,000 television and online ad blitz earlier this year tieing vulnerable House Republican to Greene and her conspiracy theories, and more recently about her misinformation and anti-vaccination rhetoric.