The change came after President Trump rejected the Commission on Presidential Debates' (CPD) decision last week that, "in order to protect the health and safety of all," the October 15th would be held virtually.

Although Biden accepted the conditions, Trump, who tested positive for COVID last just seven days before, declared he would not "waste" his time on a virtual debate.

For what would have been the second debate, each candidate decided instead to broadcast from different battleground states, with Biden in Philadelphia, and Trump in Miami. The contrast between the two events was stark, underscoring the alternative realities of the two campaigns. We chose to cover Trump.

TRUMP TOWN HALL HIGHLIGHTS
President Trump was interviewed in Miami, Florida by NBC Today's Show host Savannah Guthrie, who is a lawyer by training, and who persisted, with discipline, in pushing for direct answers to the President's statements. 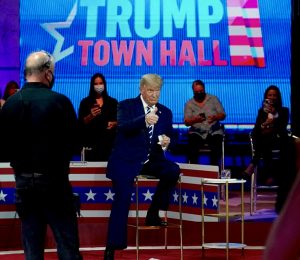 Although Trump normally revels in an audience, the format did not prove to his advantage, as his answers to questions submitted by the voters in the audience and posed by Guthrie, were erratic and combative.

On the Coronavirus Pandemic
Trump refused to confirm when his last negative test was before testing positive, or whether he was actually tested the day of the last debate, saying, "I take a lot of tests...Possibly I did, possibly I didn't."

On the superspreader event at the White House, where no masks were worn, and which has now resulted in over 30 people being infected with COVID, including his wife and son, Trump stated falsely, "As far as the masks are concerned ... a (CDC) study came out that 85% of the people who wear masks get it."
Guthrie: "I looked at that report, it's not about mask wearing. It was neutral on the question of masks."

On the fact that the United States has one of the highest deaths per capita in the world, Trump responded, "Excess mortality." Guthrie: "I'm sorry?" Trump: "Excess mortality, we're a winner on the excess mortality. And what we've done has been amazing. And we have done an amazing job."

Guthrie: "Did your National Security Advisor, on January 28th in the Oval Office, warn you that (COVID) would be the greatest national security risk of your administration?" Trump: "He did not say that. But, I knew it was a big threat. At the same time, I don't want to panic this country... and go out and say, "Everybody's going to die."

Guthrie: "A second stimulus payment has been broadly agreed upon by the Republicans and Democrats ...and yet, now we're in October and it's still not passed." Why hasn't an an emergency relief package to help Americans passed? Trump: "The problem you have is Nancy Pelosi. She couldn't care less about the worker. She couldn't care less about our people...The problem is she doesn't want to do it because she thinks it's bad for her election." 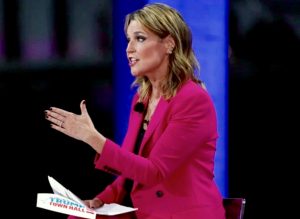 On Racism and Conspiracy
On why he refused to denounce white supremacy at the last debate, Trump responded, "You always do this ...You always start off with the question. You didn't ask Joe Biden, whether or not he denounces Antifa... I denounce Antifa, and I denounce these people on the left that are burning down our cities, that are run by Democrats who don't know what they're doing."

Trump also refused to denounce the QAnon conspiracy theory, considered by his own FBI as a domestic terror threat, and, as described by Guthrie, contends "that Democrats are a satanic pedophile ring and that you are the savior of that."
Trump: "I know very little...but what you tell me, doesn't necessarily make it fact. I know nothing about it. I do know they are very much against pedophilia. They fight it very hard. But I know nothing about it...I'll tell you what I do know about. I know about Antifa, and I know about the radical left, and I know how violent they are and how vicious they are."

Guthrie: "This week, you retweeted to your 87 million followers, a conspiracy theory that Joe Biden orchestrated to have SEAL Team Six, the Navy SEAL Team Six, killed to cover up the fake death of Bin Laden. Now, why would you send a lie like that to your followers?"

Trump: "That was a retweet. I'll put it out there. People can decide for themselves. I don't take a position. Guthrie: "I don't get that, you're the President. You're not like, someone's crazy uncle who can just ... retweet, whatever."
Trump: "I do a lot of retweets. And frankly, because the media is so fake, and so corrupt, if I didn't have social media... I wouldn't be able to get the word out."

On the Election
Guthrie: "will you accept the results of the election? Trump: "Win or lose, that's the way I want it to be. But when I see thousands of ballots, right? Unsolicited ballots, being given out by the millions, and thousands of them are dumped in dumpsters. And when you see ballots with the name Trump, military ballots, from our great military. And they're dumped in garbage cans."
Guthrie: "Your own FBI director says, there is no evidence of widespread fraud. Trump: "Oh, really? Well, then he's not doing a very good job." 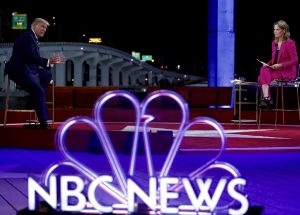 Trump: "In order to replace it with a much better healthcare at a much lower price. And always, under all circumstances, we are going to protect the Republicans...but we will protect people with preexisting conditions...I want to do, get rid of the terrible Obamacare.
Guthrie: But the promise was repeal and replace...

On Taxes & Debt
Guthrie: According to the New York Times, "you have debts of approximately $421 million that you have personally guaranteed, and that will come due in the next four years. The question is, on behalf of voters, who do you owe $421 million to?"

Trump refused to divulge the information or deny the level of debt, but said "the numbers are all wrong," and his percentage of debt is very small compared to his worth. "When you have a lot of real estate, I have real estate, you know a lot of it. Okay? Right down the road, Doral, big stuff, great stuff. When I decided to run, I'm very underlevered, fortunately, but I'm very underlevered."