On Friday, President Trump voluntarily interjected himself into another controversial debate, immediately incurring the wrath of the National Football League, professional athletes and public leaders. 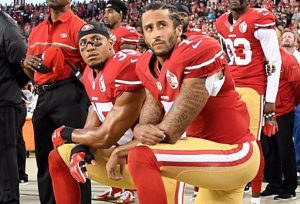 In a rant at a rally for interim U.S. Senator and Alabama special election candidate Luther Strange, Trump randomly said "Wouldn't you love to see one of these NFL owners, when somebody disrespects our flag, to say, 'Get that son of a bitch off the field right now. Out. He's fired!"

Trump was referring to football players who, since last year, have been kneeling during the national anthem in protest against social injustice and the perceived growth in racially driven police violence.

How it Began
Colin Kaepernick's first protest began during the 2016 preseason when -- in the wake of several high-profile incidents in which African-Americans were killed at the hands of police -- the San Francisco 49ers' Quarterback remainded seated during the playing of the national anthem.

When Kaepernick's quiet action drew national attention he began kneeling instead to signal respect for the flag. However, joined by several teammates, he continued to kneel during the playing of The Star Spangled Banner before National Football League games.

Although Kaepernick, now a free-agent, is not presently playing football -- his movement has expanded to include other players and athletes from every sport.

The backlash between the President's comments Friday, and Sunday Night Football, was rapid and widespread -- culminating with NFL players in every game demonstrating solidarity against Trump's comments, which NFL Commissioner Roger Goodell called "divisive." 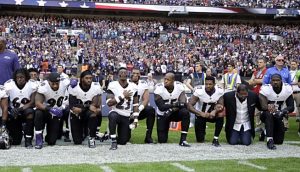 The Baltimore Ravens before their game

The NFL and several team owners issued statements condeming the President and supporting the players, which were amplified in a twitter storm -- magnified even further by the temperamental tweeter himself.

In tweets on Saturday, Trump called on NFL fans to boycott games and uninvited NBA champions, the Golden State Warriors, from a planned visit to the White House after their leading pointguard, Stephen Curry, said he did not plan to attend because of Trump's policies.

Both the Seattle Seahawks and the Tennessee Titans stayed in the locker room when the anthem played before their game Sunday, as did the Pittsburgh Steelers who were playing in Chicago.

Some team owners joined their players, stood arm-in-arm on the field during the anthem, and two anthem singers ended the song by kneeling themselves.

In the day's final game, the entire Oakland Raiders team knelt or sat during the national anthem, while across the field the Washington Redskins linked arms.