In presidential politics, a "Swing State," or battleground state, is a state where no single candidate or party has the majority support to secure that state's electoral college votes.

While there are a core 7-8 every cycle, the presidential dynamics, the candidates, other downballot races and work done by the national and state parties may put states which are usually strongholds for one party back in play.

There are 15 states whose polling averages have consistently remained below a 10% advantage for either candidate.

Polling averages are based on current reputable polls from each state, and weighted slightly to account for methodological bias and past accuracy.

In 2012, Barack Obama won by 126 Electoral Votes, 332 to 206. Trump will have to flip more than just a few of these key swing states in order to overcome Hillary Clinton in November. With normal Republican strongholds such as Arizona and Georgia tightening by the day, the swing state math becomes even more of a challenge for Trump.

To win on election day, a candidate must capture at least 270 of the 538 electoral votes. In the event of a tie (269 to 269), the House of Representatives selects the next President of the United States.

For a clear understanding of "the winding path to 270," see below. 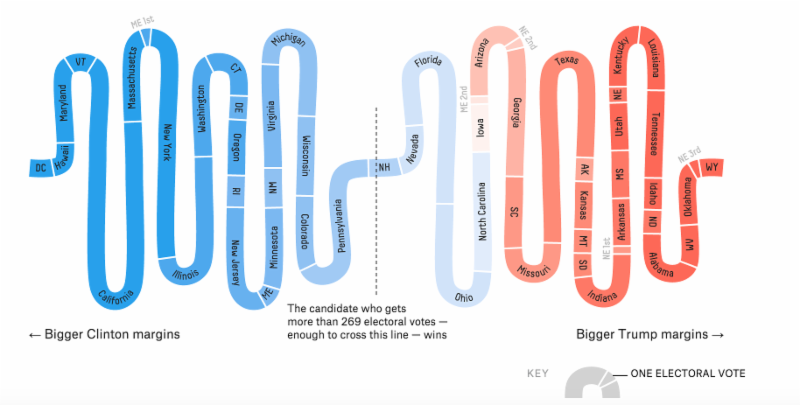 August 14, 2017 The last day of Netroots in Atlanta, Georgia was marked by more than just the conference itself. While an impressive lineup of panels and speakers, including Senator Elizabeth...