Friday's Eighth Democratic Primary Debate, held in Manchester, kicked off a weekend of scrambling by candidates to make their case for every last vote leading up to Tuesday's pivotal New Hampshire primary. 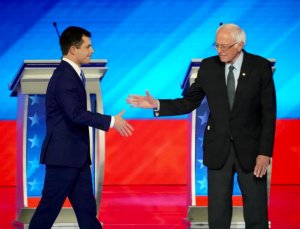 Buttigieg and Sanders were on the hot seat (ChangLee/NewYorkTimes)

The debate, hosted by ABC News, WMUR-TV and Apple News, was the second of five remaining 2020 debates before the end of the primary season in June.

The Highlights
As anticipated, most of the action revolved around Vermont Senator Bernie Sanders and former South Bend, Indiana Mayor Pete Buttigieg, the frontrunners coming out of the chaotic February 3rd Iowa Caucuses.

The sometimes fiery interactions between candidates included attacks on the two from the rest of the field, each in a fight to remain relevant.

Those were further fueled by moderator George Stephanopoulos' early question about the risks to the Party of electing Buttigieg, the least experienced in the race, or Sanders specifically, asking if anyone "on the stage is concerned about having a Democratic Socialist at the top of the Democratic ticket?" (Sanders immediately weighed in, "I am not.") 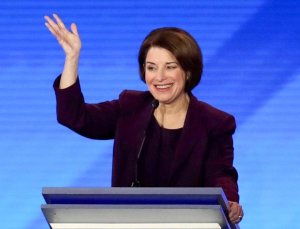 The appeal to moderate voters was consistent throughout the debate, with each candidate making the argument for why they are best suited to take on President Donald Trump in 2020.

Former Vice President Joe Biden, while acknowledging "the hit" he took in placing fourth in Iowa, pleaded for the need for a candidate who has the coattails to help elect Democrats on the rest of the ballot. "You've got to able to not just win...You've got to bring along a United States Senate, or this becomes moot."

Senator Amy Klobuchar (MN), who experienced a surge in both numbers and money coming out of the debate, said, "We are not going to be able to out divide the divider in chief...Donald Trump's worst nightmare is a candidate that will bring people in from the middle."

In a passionate plea, Millionaire businessman Tom Steyer (CA) said to "beat Donald Trump in November...we must "appeal to the diverse parts of the Democratic Party," including the black community and Latinos.

The candidates traded barbs on everything from electability, healthcare, abortion, gun control, race and foreign policy. 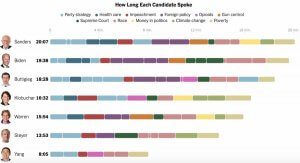 NewYorkTimes analysis. Each bar segment represents the length of a candidate's response to a question (Click)

Elizabeth Warren, who spoke almost five minutes less than Sanders, largely touted a unifying message, aside from a few shots at Buttigieg.

In one exchange she criticized his answer about racial disparities when he was Mayor, saying, "You have to own up to the facts."

When Warren spoke of the need to address racism beyond the criminal justice system, tech entrepreneur Andrew Yang said to Warren, "With respect, you can't regulate away racism with a whole patchwork of laws that are race specific."

Biden had his own unifying moment when addressing the impeachment trial, calling on the audience to stand and applaud in support of National Security Council expert Lt. Colonel Alexander Vindman, who testified against Trump and was dismissed from his post by the White House on Friday.

On the trial, Klobuchar went after Buttigieg for comments he made saying he "wanted to change the channel and watch cartoons," noting that she and three other Senators were jurors in that trial while he was "running around Iowa."

Buttigieg responded he was referring to the impeachment fatigue he witnessed among many Americans, saying to the audience, "If the Senate was the jury before, you are the jury now." 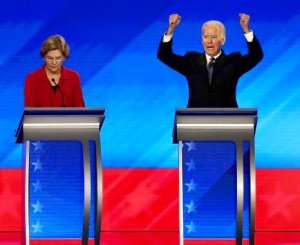 Biden called on audience to "Stand up and clap for Vindman!" (CBS News)

The subject of billionaires was also a popular subject and one that both Warren and Sanders have been driving home in their speeches in the field, including attacks against Buttigieg for courting high dollar donors.

"Unlike some of the campaigns up here," said Sanders, "I don't have 40 billionaires, Pete, contributing to my campaign."

But it was "the elephant in the room," billionaire Michael Bloomberg, who was not on stage, that may have benefited the most.

While the current cast of contenders duked it out on stage, Bloomberg, who is not participating in the early primary and caucus states, was experiencing a surge in the national polls.

The former New York City Mayor, who is self-funding his campaign, to the tune of $344 million to-date, did not qualify for previous debates because of the grassroots fundraising requirement. That has been replaced with a delegate threshold for the Ninth Democratic Debate February 19th in Las Vegas, Nevada. 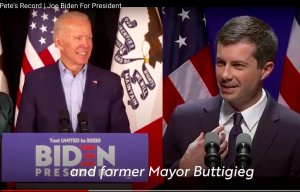 The Sanders campaign, however, is asking for a partial recanvass of results in 25 precincts and three satellite caucus locations.

Related: DemDaily: Update on the 2020 Debates! 2/3/20
The Eighth Debate: Read the Transcript