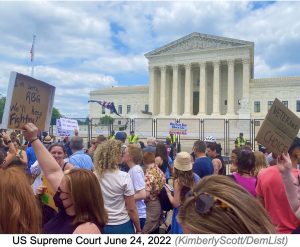 In a 5-4 decision delivered at 10:00am this morning, the conservative majority of the Supreme Court of the United States struck down the landmark 1973 Roe v. Wade decision, holding that there is no longer a federal constitutional right to an abortion.

While the decision was anticipated following the unprecedented leak of Justice Samuel Alito's draft opinion on May 2, the impact is no less devastating.

The stunning reversal of a woman's right to choose, which has been the rule of law for almost 50 years, turns the authority to implement abortion laws over to individual states.

The ruling in Dobbs v. Jackson Women’s Health Organization concerns a challenge to a 2018 Mississippi law that bans virtually all abortions after the 15th week of pregnancy. Lower courts, including the conservative US Court of Appeals for the 5th Circuit, blocked the state from enforcing the law as it violated the tenants of Roe v. Wade. 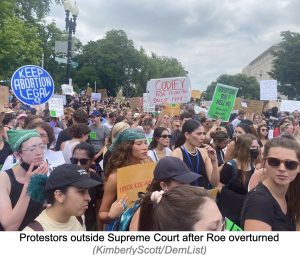 In direct questioning from Senators during their confirmation process, Kavanaugh and Barrett, both nominated by Trump, answered that they respected the legal principle of Stare Decisis, which adheres to precedents like Roe.

While Chief Justice John Roberts joined his conservative colleagues in voting 6 to 3 to uphold the restrictive Mississippi law, he disagreed with their decision to take the additional step of overturning Roe and Planned Parenthood v. Casey.

In his concurring opinion, released today, Roberts wrote, "Both the Court's opinion and the dissent display a relentless freedom from doubt on the legal issue that I cannot share...The Court's decision to overrule Roe and Casey is a serious jolt to the legal system -- regardless of how you view those cases, A narrower decision rejecting the misguided viability line would be markedly less unsettling, and nothing more is needed to decide this case."

In a joint dissent, liberal Justices Stephen Breyer, Elena Kagan, and Sonia Sotomayor assailed the “draconian” opinion and the court’s “cavalier” conservative majority for exercising “hypocrisy” in the way they interpret the Constitution. 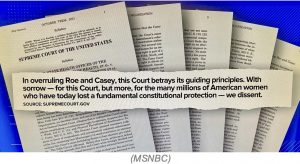 “The majority would allow States to ban abortion from conception onward because it does not think forced childbirth at all implicates a woman’s rights to equality and freedom."

The court decision means that "young women today will come of age with fewer rights than their mothers and grandmothers," they wrote, and that the court's opinion means that "from the very moment of fertilization, a woman has no rights to speak of. A state can force her to bring a pregnancy to term even at the steepest personal and familial costs."

The justices also addressed the disparities that will arise from the ruling. "It is not hard to see where the greatest burden will fall...In states that bar abortion, women of means will still be able to travel to obtain the services...it is women who cannot afford to do so who will suffer most...Women living below the federal poverty line experience unintended pregnancies at rates five times higher."

Most threatening of all,” they added, nothing in the majority’s decision “stops the Federal Government from prohibiting abortions nationwide...from the moment of conception and without exceptions for rape and incest.” 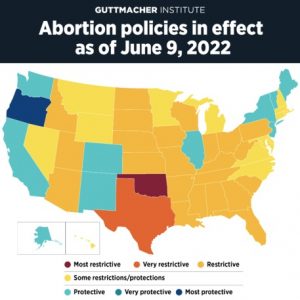 The Consequences
The decision sets off a seismic wave of restrictive laws across the country, with as many as 26 states poised to ban all or nearly all abortions.

Of those, 13 states, primarily in the south and midwest, have "automatic trigger" laws designed to render abortion illegal once SCOTUS overturned Roe.

As of this afternoon, Arkansas, Louisiana, Kentucky, Oklahoma, Missouri and South Dakota had pulled those triggers. The remaining states have a 10-30 day pause before their laws go into effect. In the coming weeks or months, yet another 13 states are expected to enact abortion bans.

16 states and DC, however, already have laws on the books that will protect abortion rights.

Yet to be determined are the ramifications for other individual rights, as Alito attacked the right to privacy grounded in Roe and the rights guaranteed under the Fourteenth Amendment.

In his concurring opinion, Justice Thomas said the legal rationale for Friday's decision could be applied to overturn other major cases, including those that legalized gay marriage, barred the criminalization of consensual homosexual conduct, and protected the rights of married people to have access to contraception. 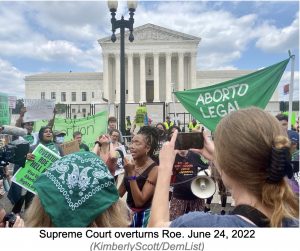 "For that reason, in future cases," stated Thomas "we should reconsider all of this Court's substantive due process precedents."

Indeed, the liberal justices warned in their dissent that “No one should be confident that this majority is done with its work. The right Roe and Casey recognized does not stand alone.”

President Joe Biden spoke to the nation at 12:37pm today, saying this is "a very solemn moment...a sad day for the Court and for the country...The Court has done what it has never done before: expressly take away a constitutional right that is so fundamental to so many Americans that had already been recognized.

"But it doesn’t mean the fight is over. Let me be very clear and unambiguous: The only way we can secure a woman’s right to choose and the balance that existed is for Congress to restore the protections of Roe v. Wade as federal law. No executive action from the President can do that. And if Congress, as it appears, lacks the votes to do that now, voters need to make their voices heard.

"The consequences and the consensus of the American people -- core principles of equality, liberty, dignity, and the stability of the rule of law -- demand that Roe should not have been overturned."

Biden pledged to "use all in my power to protect a woman’s right," listing a series of actions in the coming days.

While the pollsters and pundits finish dissecting the presidential, and we await the final numbers in a few states, there are some bright spots for Democrats to celebrate.