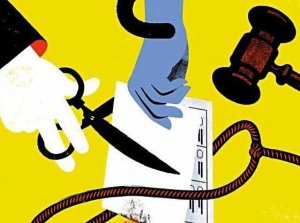 Now just one day away from one of the most important elections of our time, efforts to suppress the ballots of targeted, predominantly minority voters, are in full force.

From "official" acts by Republican lawmakers to disenfranchise voters, to individual incidences of physically preventing voters from getting to the polls, overt attempts to suppress and deceive potential voters -- in person, on air, online and in court -- are unprecedented nationwide.

Georgia
Georgia is Ground Zero for voter suppression in the closest Governor's race of 2018, where former State House Minority Leader Stacey Abrams (D) is poised to become the first female African American Governor in US History. 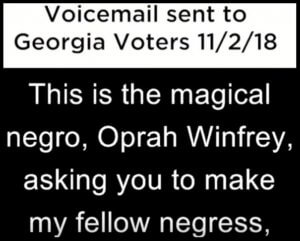 Voters scored a major victory in Georgia Friday when US District Judge Eleanor L. Ross ruled that the state's "exact match" voter verification process - which requires voter applications to precisely match the information on file with the Georgia Department of Driver Services or the Social Security Administration - violates voters rights.

The ruling is a major blow to Abrams' Republican opponent, Brian Kemp, who, as Secretary of State, is responsible for enforcing voting laws in the state. Kemp has used the exact match rule to stall over 53,000 voter registrations, 70% of which were African American.

In a separate "voter roll maintenance" process Kemp has cancelled over 1.4 million voter registrations since 2012. 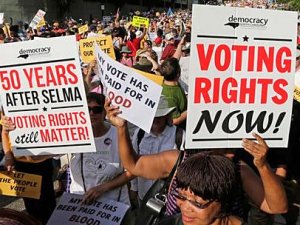 In an apparent counter-measure to Friday's ruling, Kemp's office announced Sunday that it is investigating the Georgia Democratic Party over an attempted hack of the state's voter registration system. No evidence has been provided to back up the claim.

Kansas
In a similar scenario, Kansas Secretary of State Kris Kobach, who is in a tight race for governor against Democrat Laura Kelly, is using the power of his current office to manipulate the election outcome.

Under Kansas' strict voter ID laws, implemented by Kobach in 2011, 1,200+ ballots have been invalidated and resulted in a 2% decrease in predominantly young, black and newly registered voters turning out in 2012.

Most recently Republican election officials moved the only polling place in Dodge City -- which is majorty-Hispanic and historically reports the highest number of voters per polling location in the state -- to a remote site outside city limits, away from public transportation. On Thursday a federal judge denied a request to overturn the move.

In a comparable ruling, a federal judge upheld a new North Dakota law, implemented by the Republican-controlled state government, that requires voters to show identification with a current residential street address. A potential 70,000 residents who don't have qualifying identification may be affected, including 5,000 Native Americans who live on reservations and only have post-office boxes. 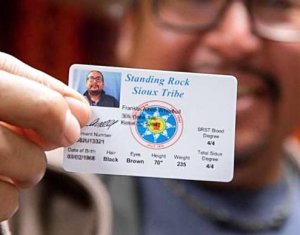 Democratic Senator Heidi Heitkamp credited her 3,000-vote victory in 2012 to support from the state's Native American population, which account for 5% of qualified voters.  Heitkamp, who is in the most vulnerable re-election battle in the country, currently trails her Republican challenger, Kevin Cramer, by an average of 11%.

Florida
In Florida, where both the gubernatorial and US Senate contests are down to the wire, 1.6 million ex-felons won't be able to vote in this year's election, including close to 500,000 African-Americans.

The law was passed in 2011 by current Republican Governor Rick Scott who is challenging incumbent Senator Bill Nelson (D).

In Scott's open governors seat, Republican Rick DeSantis is in a statistical dead heat with Democrat Andrew Gillum, who would be the state's first black governor.

Florida is one of four states whose constitution permanently disenfranchises citizens with past felony convictions, unless pardoned by the governor. The others are Kentucky and Iowa, where lifetime bars are in place, and Virginia, where felons' voting rights are being restored on a rolling basis.

Under Tennessee's strict voter identification laws, at least 250,000 drivers' licenses have been suspended for nonpayment of traffic fines since 2012 -- thereby preventing predominantly lower-income citizens from voting. 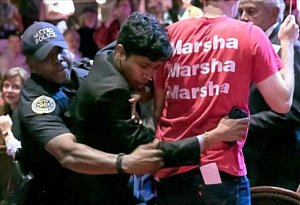 In majority-African American Shelby County, the state's largest county, the NAACP sued the election commission last month to release a backlog of more than 10,000 voter registration applications that were not processed because they were deemed "incomplete" (including those where a citizen's title such as "Mr." or "Ms." were left blank). The Tennessee Supreme Court ruled last week that such voters could cast provisional ballots only, which still require verification.

Texas
In Texas, Republican Attorney General Ken Paxton "Election Fraud Unit" is racking up a record number of defendents with public intimidation charges. Included among those is a Fort Worth woman who was sent back to federal prison this month because, as a felon on release program, she tried voting during the 2016 election. In Texas, people convicted of a felony can't vote until they fully finish out their sentence.

Texas' voter ID law, one of the strictest in the country and which requires government-issued identification, was upheld by the 5th District Court in April.  Handgun licenses are accepted, but not college student IDs.

In the Lone Star State, where Democrat Beto O'Rourke is within 3% points of unseating Republican incumbent Senator Ted Cruz, more people have cast their votes early than the entire turnout in the 2014 midterms.

Tomorrow is Election Day. Don't let your vote be suppressed!