After a whirlwind 72 hours in which three presidential candidates ended their campaigns, the race for the White House goes into its most significant series of primaries today -- 16 contests in all, including 14 states, one territory and Democrats Abroad. 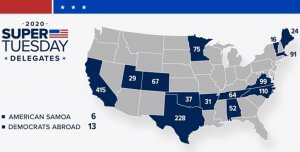 Joe Biden's sweeping victory in Saturday's South Carolina Primary put him back in the game, followed by the significant endorsements of three of his former rivals -- Amy Klobuchar (MN), Pete Buttigieg (IN) and Beto O'Rourke (TX).

According to the Associated Press, the delegate count stands at 60 for Bernie Sanders and 54 for Biden, but with 1,357 delegates at stake today, those numbers are about to shift drastically.

Prior to Saturday, Sanders was leading in most Super Tuesday states, including the delegate-rich states of California (415), Texas (228), and Virginia (99), but polling updates in the last 24 hours have shown a shift toward Biden.

Two California polls taken since Saturday show a four-point shift to Biden, putting Sanders @32% and Biden @25%. Elizabeth Warren and Michael Bloomberg, who received a 6% bump in recent days, were at a statistical dead heat at 16% and 17%.

After the close of today's Super Tuesday primary contests, approximately 38% of the delegates for the Democratic nomination for the 2020 presidential election will have been allocated.

For the first time in a modern American presidential campaign, a debate on trade and manufacturing policy has taken center stage in both parties. Recent focus group and polling data show these...