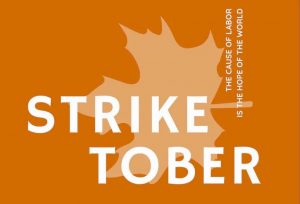 On October 5th, more than 1,400 Kellogg workers from Michigan, Pennsylvania, Nebraska and Tennessee went on strike following a dispute over wages, health and retirement benefits, and extended work hours.

The same week, West Coast nurses voted, by 96%, to authorize a walkout after negotiations stalled over a new proposed wage system with private hospital group Kaiser Permanente. The vote covered approximately 24,000 workers represented by the United Nurses Associations of California/Union of Health Care Professionals, and the Oregon Federation of Nurses and Health Professionals, as well as 7,600 members of the United Steelworkers.

The strikes are among 183 labor actions taken against employers this year, in a wave of resistance that has culminated this month in what some are dubbing "Striketober."

On Monday, the International Association of Theatrical Stage Employees (IATSE) reached an agreement for its 60,000 members, staving off what would have been the first strike in the union's 128-year history.

All follow a summer of increased labor actions, from the Frito-Lay workers strike in Kansas, to the five-state Nabisco workers strike, to the Warrior Met Coal strike in Alabama.

The uptick in strikes is a byproduct of the shortage in the labor market in the wake of the coronavirus and the current supply chain crisis, providing workers with new leverage to demand better wages and working conditions.

Americans are leaving their jobs in droves, as they rethink their priorities and positions after a pandemic that has exhausted front line and "essential" workers who are feeling undervalued.

The unrest has emboldened employees to exercise their newly found position of power in negotiating with businesses and corporations.

According to the Washington Post's Jacob Bogage, who spoke to union officials and economists, "The trend is an offshoot of the phenomenon known as the Great Resignation, which has thinned the nation’s labor pool and slowed the economic recovery. Workers are now harder to replace, especially while many companies are scrambling to meet heightened demand for their products and manage hobbled supply chains. That has given unions new leverage, and made striking less risky."

In interviews, workers and labor leaders said union members are angry with employers for failing to raise pay to match new profits, are disappointed by the lack of high-quality jobs, and are frustrated that wage growth is not keeping pace with inflation.

Although the average U.S. worker’s hourly pay was up 4% in September compared to a year ago, inflation grew 5.4% over the same period.

“The strikes are sending a signal that employers ignore workers at their peril. I think this wave of strikes is actually going to inspire more workers to stand up and speak out and put that line in the sand and say, ‘We deserve better.'" - AFL-CIO President Liz Shuler, Washington Post Interview

While the union movement has long been a significant political power in this United States, its numbers have been declining - now making up just 11% of the country's workforce.

Labor conditions, and the plight of the American worker under the pandemic, have been laid bare during the crisis -- and has served as a painful education to the public of the need for unions.

DemDaily: Manufacturing Towns: Where We Lost 10/8/21