President Joe Biden this morning signed a bill to force a tentative rail labor agreement, averting what would have been the first national railway strike in 30 years.

The agreement, which passed the US Senate 80 to 15 on Thursday, ends the threat of a shutdown that would have wreaked havoc on the nation's freight and passenger rail service and the US economy. 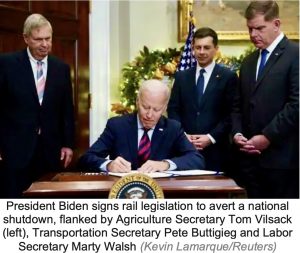 A Tentative Agreement (TA) between the railroads and a dozen unions representing railway workers was brokered by Secretary of Labor Marty Walsh in September, but was rejected by four unions involved in the negotiations over its lack of paid sick leave.

The Brotherhood of Railroad Signalmen (BRS) announced it would also align with the unions, and other unions that voted for ratification said in support of their fellow workers, they will not cross picket lines.

Under the 1926 Railway Labor Act, Congress can block a strike and impose labor agreements to prevent the interruption of interstate commerce during labor disputes. With talks stalled between the railroads and four unions, and the strike deadline looming, Biden turned to Congress to pass the emergency measure. Labor groups have said that enforcing an agreement with the legislation action denies them the right to strike.

The legislation enacts new contracts providing railroad workers with 24% pay increases over five years from 2020 through 2024, immediate payouts averaging $11,000 upon ratification, and $5,000 in bonuses retroactive to 2020. 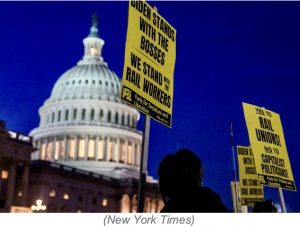 It enshrines the two-person crew system, which workers have long advocated for as a safer alternative to solo rail operation, and tempers the companies' stringent attendance policies, removing penalties for missing time due to medical appointments. Employees are expected to pay a larger portion of their health insurance costs, but premiums would be capped at 15%.

While the legislation provides one additional day of personal leave, it does not provide the paid sick leave provisions sought by the unions -- the major point of contention in negotiations.

Senator Bernie Sanders (I-VT) proposed a separate measure adding seven days of paid sick leave to the agreement, but it was struck down in the Senate, 52 to 43, led by Republican lawmakers aligned with the US Chamber of Commerce.

Although the unions won a number of quality-of-life concessions, many union members are still angry at having suffered three years without a raise and with the human toll exacted on their health and lives while delivering as essential workers during the pandemic. 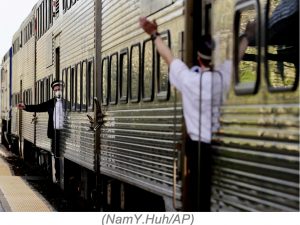 The railroad industry slashed almost 30% of its workforce over the past six years, cutting pay and other costs as rail carriers are posting record profits.

According to the Bureau of Labor Statistics, the number of US railway workers has dropped from more than 600,000 in 1970 to about 150,000 in 2022, due to cost cuts and increased automation. As a result, many industry workers are on call at all hours with little notice before starting a shift, leading to tremendous stress.

The strain on workers, the backbone of the industry, has been immense -- as laid bare by the strike threat.

Biden, who prides himself as "the most pro-union President in history," previously argued against congressional intervention in railway labor disputes as unfairly interfering with union bargaining efforts.

This case was an exception, he argued, because a strike would cripple the US economy. “Without freight rail, many US industries would literally shut down. Thanks to the bill Congress passed and what I’m about to sign, we spared the country that catastrophe.”

“I know this bill doesn’t have paid sick leave that these rail workers and frankly every worker in America deserves. But that fight isn’t over,” promised Biden.

August 21, 2019 The Democratic National Committee meets in San Francisco, California this Thursday through Saturday for its Summer Meeting to discuss organization and strategy leading up to the...