Billionaire, environmentalist and and progressive activist Tom Steyer announced his bid for the presidency this morning, becoming the 26th Democratic candidate to enter the crowded 2020 race for the White House.

Steyer, who stated in January that he would not run, has been focused instead on his self-funded Need To Impeach campaign against President Trump, launched in November of 2017, following the first of the Mueller Russia-Trump investigation indictments.

His announcement video, however, did not mention the impeachment effort, but focused on ending "the hostile corporate takeover of our democracy," and included images of Paul Manafort, Bernie Madoff, and Trump administration officials as symbols of a corrupt and criminal Trump administration.

Background
Steyer, 62, is a former hedge fund manager and founder of Farallon Capital, which he sold in 2012. 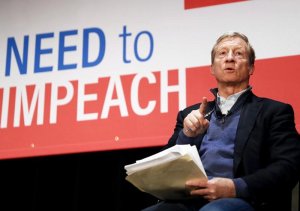 Steyer and his wife, Kat Taylor, also founded the nonprofit community and socially responsible Beneficial State Bank. In 2008, they gave $41 million to create the TomKat Center for Sustainable Energy at Stanford University.

Steyer, who earned his MBA from Stanford Business School and served on the University's Board of Trustees, received his undergrad in economics and political science from Yale University.

In 2010 Steyer and Taylor signed The Giving Pledge, along with Warren Buffet and Bill Gates, to donate half of their fortune to charity during their lifetime.

Citizen Steyer
A native of Manhattan, the longtime San Francisco resident has since become a force in environmental battles and national progressive politics over the last decade.

An early Hillary Clinton supporter in 2008, he later became one of Barack Obama's top fundraisers. He was considered for Treasury Secretary, and spoke at the 2012 Democratic National Convention.

Steyer's passionate support of the environment has at times put him on the opposite side of his usual progressive collaborators, including factions of organized labor who waged a public battle against the billionaire over his vocal opposition to the Keystone Pipeline. 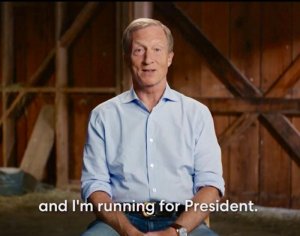 The non-profit, its political action committee and Steyer spent a reported $74 million on the 2014 elections and an estimated $100 million in 2016.

In 2017 NextGen contributed $2.3 million to immigrant rights groups, and launched NextGen Rising to turn out young voters in targeted states.

Steyer, considered by most accounts to be the single largest Democratic donor in history, spent a reported $120 million to support Democrats in the 2018 elections.

Candidate Steyer
Despite the late start, Steyer enters with two advantages, the first of which is his pledge to invest $100 million of his own funds into his presidential campaign.

The second is a nationwide political infrastructure cultivated through his aggressive media and issues efforts, including a list of 8.2 million emails through his impeachment campaign alone.

It is unlikely that he will meet the DNC's polling and grassroots fundraising thresholds in time to qualify for the second Democratic primary debate July 30th and 31st.

We can expect, nevertheless, to see him on television in the immediate future. Steyer's presidential campaigns has already booked in excess of $1 million in ads in early primary states.